The constants to this dish seem to be the onions (no duh), bacon, and sour cream custard, although vegetarians do make their own versions, omitting the bacon. Some mushrooms might make a good substitute.

I used a mixture of whole wheat and unbleached flour, which worked fine. Actually, I had a certain amount of cognitive pizza dissonance with this -it looks like pizza, it cuts like pizza, but then the crust is much richer and biscuit-like, and that eggy sour cream custard is like nothing you’ll ever find on a pizza. Also caraway! Once I got over that, though I found it very good.

Some green salad or sautéed cabbage will make this a complete meal. 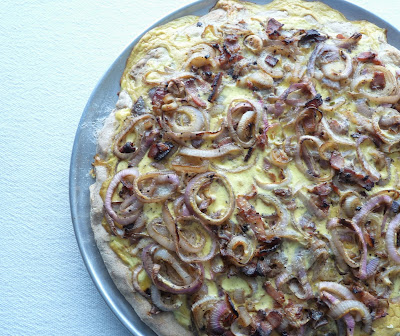 Mix the flours with the salt in a mixing bowl and set aside.

Warm half the milk until it feels just warm, then add the yeast and let it sit in a warmish spot for 10 minutes, until foamy.

Warm the other half of the milk with the butter, until the butter is just melted. When it has cooled to room temperature, whisk in the egg, and the milk and yeast mixture.

Make a well in the flour and pour in the milk mixture. Stir to form a rough dough and turn it all out on a clean board or counter. Knead for 5 to 10 minutes, until you  have a smooth, elastic dough. Sprinkle the board with flour as required to keep it from sticking; it’s okay to let the dough absorb a bit more if it needs it.

Put the dough in a clean, oiled bowl and cover with a clean cloth. Let rise until doubled, about an hour to an hour and a half.

When the dough has almost doubled in size, chop the bacon fairly fine and fry it until on the crisp side. Lift out the bacon, leaving any fat in the pan.

While the bacon cooks, peel and slice the onions into rings, fairly wide (about 1/2 cm). When the bacon comes out, add the onions to the pan and cook for 15 to 20 minutes over medium heat, stirring frequently but gently. The rings should separate but mostly stay whole. If necessary, add a little more bacon fat (if you have it) or oil to the pan to keep them from sticking.

When they are done, add them to the bacon, and season with the salt, pepper, and caraway. Toss to combine. The amount of salt will depend very much on how salty the bacon is, so check.

Whisk the sour cream with the eggs, and season with a bit of nutmeg.

Roll or pat the dough out to fit a large pizza pan or rectangular baking pan. Try to keep a bit of a rim of dough around the outside to keep the filling from running out – as you can see I was not really successful at that myself. Spread the onions and bacon evenly over it. Drizzle the sour cream and eggs evenly over the onions and bacon.

Bake at 400°F for about 30 minutes, until the custard is set. Let cool to warm or room temperature before serving.

Last year at this time I made Bean & Salsa Soup.