I came up with the idea for these thinking they would be easier than classic Chicken Cordon Bleu, what with not having to mess about with getting the chicken evenly pounded thin in order to stuff it. (I’m also having a bit of an obsession with Russian-style chopped cutlets at the moment, so there’s that too.)

The answer is maybe; these are a little delicate to handle. I’ve made them a couple of times and keep thinking I should try them with a bit less milk, but then they keep cooking up so nicely that I persist in putting in the amount listed. They may be somewhat sloppy when raw but they cook up to be tender and moist, and you can press them back into shape as soon as they go into the pan if they are inclined to go wobbly on you. In particular the ham and cheese need to be completely covered.

The flour I use to dip them is barley flour which I think gives a particularly nice grainy crust, but you can use regular wheat flour if you prefer. Sliced ham from the deli is fine, indeed much the easiest choice. If you use peameal bacon, be sure to sauté it before you use it to make sure it isn’t sitting in the middle in a state of uncookedness. 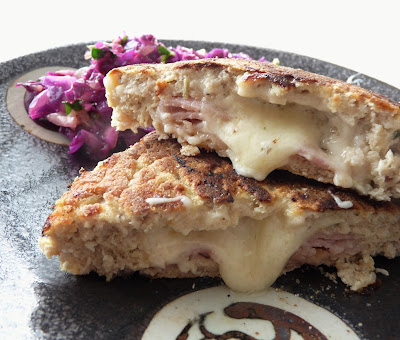 Crumble the roll into a mixing bowl and soak it in the milk or cream. Season with the salt, pepper, and herb of your choice.

Once the milk is absorbed by the bread, break in the egg and mix it in. Mix in the ground turkey or chicken. This is a fairly wet mixture so be prepared for that.

Lay out a sheet of parchment paper and put the flour on a plate. Put the oil in a large skillet and heat it over medium heat.

Measure out half the mixture into 6 equal globs on the parchment paper, and form each of them into a neat, flat circle. Lay a bit of cheese and ham on each – they should be cut so that they cover the patty to within about 3/4″ of the edge. Divide up the remaining mixture and form a small patty in your hand to go over each prepared cutlet on the parchment paper. Pat them sealed. One at a time, lift them with a large, thin lifter and put them in the plate of flour. Turn them to coat, or just lift and sprinkle some of the flour over the top until evenly coated. Lift out and place in the pan to cook.

Cook the cutlets for 5 to 6 minutes per side, until well browned. You may need to add a little more oil to the pan when you turn them. A spatter guard will avoid spatters and also help hold in the heat to cook them through. If you don’t have one, put a lid on with just  little sliver of air to let the steam out.

Last year at this time I made Caramel Apple Pudding.