Mashed together. Carrots may also be added. “

Champ is so simple it is hardly a recipe, but please indulge me as I indulge myself in some nostalgia.

Circa 1983 was a bit later than I would have expected this to show up in Dad’s cook book. Trevor must have appeared on the scene around 1977, because I remember having a bowl of spaghetti dumped on my head when I was 16 by Dad when they were dating and Trevor didn’t show up to a dinner he was invited to and I whined about it being cold when we finally ate it without him. Good thing I was right. But that’s another story.

I guess by 1983 they had dated for a few years and had been moved in together long enough for Trevor to have made it a few times. I think Dad did most of the cooking in those days, since he was well accustomed to churning it out for us kids at that point.

This is a simple but classic Irish dish, really just mashed potatoes with stuff in it. Not cabbage though; if you add cabbage it becomes Colcannon, a distinction which seems a little picayune to me but there it is.

I haven’t seen other recipes for champ call for carrots but I think they are a very good idea. I grated them and added them for the last couple minutes of cooking – in the absence of other instructions – because I wanted them to form flecks like the green onions. You could just cut them up and cook them with the potatoes so they get mashed though. The cheese should be quite strong, or it disappears. I saved some of it out to sprinkle on top and that helped keep it noticeable. The dairy can be almost anything – milk, cream, buttermilk, yogurt, sour cream would all work. 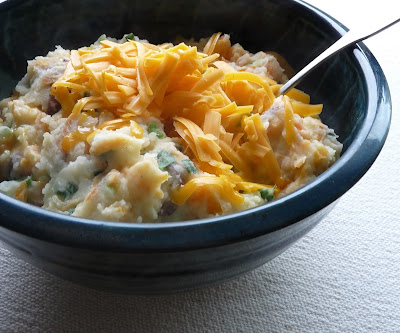 Wash and trim or peel the potatoes (and carrots, if that’s how you want them), and cut them into chunks. Boil them in lightly salted water for 10 to 15 minutes, until soft.

Meanwhile, trim, wash, and chop the green onions. Peel and grate the carrots – assuming they are not already in the pot – and add them to the potatoes when they have about 3 minutes left to cook. Grate the cheese.

When the potatoes are done, add the green onions to the pot. Stir them in, then drain the vegetables well and return them to the pot. Put it back on the stove, but with the heat reduced to medium-low. Mash in the butter and liquid dairy product of your choice. Season with salt and pepper to taste. Stir in most of the cheese, and once the champ is transferred to its serving dish, sprinkle the remainder over the top.