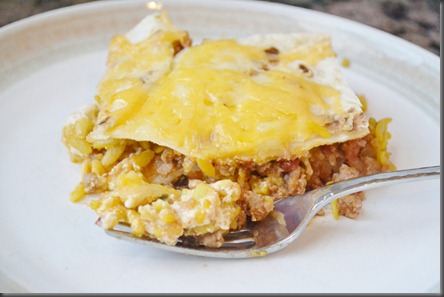 I was wanting something Mexican, but not the typical stuff like tacos, enchiladas, etc. So I came up with this little recipe. We all loved it. And then we had it for leftovers for like 4 days after:) It’s a nice change to the same-old, same-old.
1 lb ground beef (I use ground turkey)
1/2 onion, diced
1/2 green pepper, diced
3 garlic cloves, minced
1 taco packet
1 can diced tomatoes with juice
1 (8oz) can tomato sauce
1 can black beans, rinsed
1/2 cup corn
2 cups rice of your choice (I used Knorr Fiesta Sides Mexican Rice packet because it was easy)
2 cups cheese
1 cup sour cream
1/4 cup salsa
6-8 tortillas
Brown meat with onion and garlic. Add green pepper and taco packet. Cook for several minutes. Add diced tomatoes and tomato sauce. Let simmer for several minutes. Add black beans and corn and simmer until thick and most of the liquid is absorbed.
While that’s simmering, make the sour cream sauce by mixing the sour cream with the salsa.
In a 9×13 pan, spread half of the meat mixture evenly in the bottom. Spread 1 cup rice over meat mixture, then spread half the sour cream mixture over top of the rice. Sprinkle half the cheese over top of the sour cream mixture. Put approx 3-4 tortillas over top of the cheese, tearing them to make them fit into corners. Then layer the rest of the meat mixture, then the rest of the rice, then the rest of the sour cream mixture. Put the rest of the tortillas over top and then top with the rest of the cheese. Bake at 350 degrees until bubbly and top is browned and slightly crisp, about 30 minutes. Let sit for 5 minutes before cutting and serving. Enjoy!
Share