Home » Salads » The Brutus Salad – Watch Your Back, Caesar!

The Brutus Salad – Watch Your Back, Caesar! 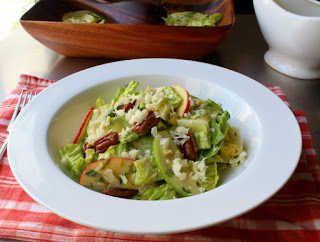 I don’t post a lot of salad videos, since, other than the dressing recipe, what am I going to teach you? Most people are pretty good when it comes to tossing things in a bowl, but I made an exception for what I’m calling a “Brutus.”

I discovered this salad at a great restaurant in Healdsburg, called Willis’s Seafood, where it was definitely not called a “Brutus,” but simply described as a, “Little Gem Salad, Dijon Vinaigrette, Fuji Apples, Aged White Cheddar, Fresh Herbs, Fried Pecans.” It sounded amazing, and tasted even better.
It was so good, I joked that it could replace the Caesar as America’s favorite tossed salad, and a few beers later, the idea to call it the “Brutus” was born. I’m explaining this not only to give credit, where credit’s due, but also to make clear it has nothing to do with politics. Yes, nothing to do with it. Nothing at all.
Normally, I would tell you to add whatever you want to this salad, but not this time. Please make it exactly as shown. Having said that, you’ll of course have to adjust the dressing to your taste, but you already knew that. I really do hope you give this a try soon. Enjoy!
Ingredients for 4 portions:
For the dressing:
1/4 cup real French Dijon mustard
1/4 cup seasoned rice vinegar
1/4 cup vegetable oil
1/4 teaspoon Worcestershire sauce
freshly ground black pepper
cayenne to taste
– the dressing should be sharp and acidic, but please adjust to your taste
For the salad:
4 hearts of romaine, cut or torn into bite-sized pieces
2 ounces extra-sharp aged cheddar
1 apple, thinly sliced
2 tablespoons fresh tarragon leaves, chopped
2 tablespoons dill sprigs, chopped
3/4 cup pecan halves, toasted in 2 teaspoons vegetable oil, seasoned with salt and 1 teaspoon of white sugar
Share