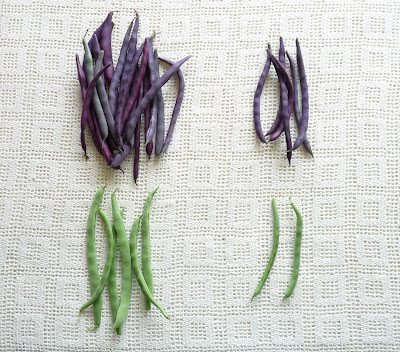 Here is a post about some beans that are not available to anyone. They only exist in my garden.

Last fall I finally found something I had been looking for for a while. A plant with black-coated seeds showed up in the Blue Lake beans. Given the beans I’ve been growing, that means it was a Blue Lake – Cherokee Trail of Tears cross. I was looking for such a cross because ever since the summer of 2013 we have been struggling with anthracnose in the beans.

Blue Lake appears to have moderately good resistance to anthracnose, not succumbing until we have managed about half a crop, but Cherokee Trail of Tears has better resistance, not succumbing until near the end of the season. The flavour of Cherokee Trail of Tears is quite similar to Blue Lake, although it is a much more variable bean. At any rate, I was quite excited and carefully saved all the black crossed beans to plant this year.

Cherokee Trail of Tears beans are green, but often have a purple flush to them. I was not too surprised therefore when about three-quarters of the f2 beans turned out to be actually purple. I was a bit more surprised that three-quarters of the beans turned out to be flat. I’m looking for beans as much like Blue Lake as possible, but with better anthracnose resistance. That means that right off the bat, I am eliminating fifteen-sixteenths of them on the grounds of looks alone, although on re-examination of Blue Lake beans they seem to have some variability in shape. I think of them as round, but they go from round to flattish.

When I grow out these beans next year I will be eliminating a bunch on different grounds. I see many of the green beans, but not all, have pink flowers. Blue Lake flowers are white, but I think I will eliminate white flowers from the crossed group. I want them to be very like Blue Lake but it will be helpful to have a way to differentiate them! None of these beans seem to have strings, but it will be something to watch for as well. Also, I want white seeded or at least very pale seeded beans.

There are two skinny little beans in the photo above which have the look of Blue Lake. Unfortunately, I don’t think either of them quite have the flavour of Blue Lake either. One of them comes close, I think. They are from 2 different plants. They are so small because these 2 green, round-podded plants also seem to have started producing one to two days later than most of the others. The beans in the picture are all I picked on the first day there were enough of them ready to pick.

So it looks like I have exactly one bean plant that looks and tastes like what I want, which is certainly a big step up from having zero. The next question is, does it have improved anthracnose resistance? I don’t know yet, as the anthracnose has yet to get going. The very hot dry weather we have had this year seems to be slowing it down at least.

I did not plant all the beans from last years crossed plant; I will plant the rest next year and see if I can get another plant of the type I am looking for. Also I should watch the purple and flat plants to see how they do with anthracnose, and how they are for flavour. Just because they aren’t exactly what I am looking for doesn’t mean they couldn’t be good, desirable beans. 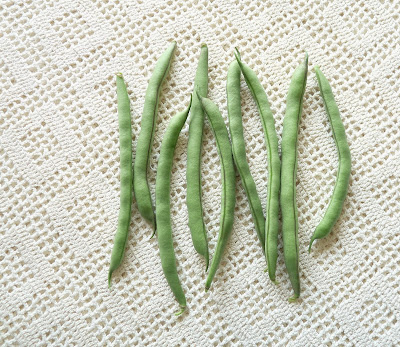 The other bean I was quite excited about last year was one that I grew out from an Annelino Yellow – Cherokee Trail of Tears cross. (Yes, Cherokee Trail of Tears is a stud. If I wasn’t growing it, I would think beans hardly ever cross; but since I am, I think they cross all the time.) It was a long, dark green bean with a purple haze over it, and it was delicious. It was also productive and had good anthracnose resistance. I saved most of the beans for seed and planted them again this year.

The first group of beans I picked from the resulting plants were disappointing. They were much stubbier, didn’t have the purple haze, and didn’t have the delicious flavour. I’m starting to see some slightly later producing plants with longer, purple hazed beans on them so I am still hopeful that I can get the style of bean I am looking for out of this batch, but it isn’t going to be a doddle. I had Mom try some and she thought they were really tasty but noted that some of them had strings. That will be a trait we will want to weed out.

One quality they seem to have retained from last year (when they were f1) is that they develop quite slowly. This means they are not the earliest of beans, but they only started a few days after the Blue Lake, and they seem to actually hold quite well, both on and off the plant – an excellent trait. Finally, they do seem to have maintained one other very desirable quality; they are extremely productive, right up there with the Blue Lake. I’m not quite as excited about these as I was last year, but I think they are worth continuing to grow out and select.