You need to have access to a good German-style butcher to get smoked pork chops. Fortunately, here in southwestern Ontario that is not too difficult. They are so good that usually I just fry them up and serve them, maybe with some applesauce. Mashed potatoes are the classic choice to serve on the side, alongside whatever green vegetable you would like.

Smoked pork chops come in 2 styles. Some are brined before smoking, making them rather ham-like. This seems to be more common, although I have purchased others that were simply smoked, and were essentially raw. The brined ones will cook a bit faster, but otherwise they are treated the same. They will also vary in their degree of saltiness, so don’t add much salt to the sauce to start with but be prepared to adjust it at the end.

They don’t take too long to cook either way so you should at least have the sauce ingredients out and ready to mix before you start cooking the chops. Keep a light hand with the salt and the lemon zest, although remember the sauce should taste a bit stronger than you would want to eat straight, since in fact you won’t be eating it straight but putting it on the chops. 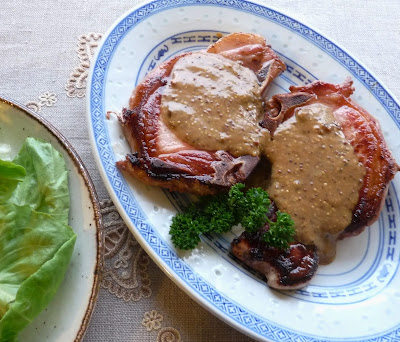 Measure the stock or water and set it aside.

Mix the starch, mustard, lemon zest, salt, pepper, and sherry in a small bowl until smooth. Mix in the cream until smooth.

Heat the bacon fat (or other oil, if you must) in a large cast iron skillet over medium-high heat. When it is melted and just starting to smoke, add the chops and cook them for 7 to 10 minutes per side, until the chops are done to your liking. The time will vary according to the thickness of the chops and the style of smoking.  Ham-like chops will cook a little faster than raw smoked chops.

When the chops are done, remove them to a serving platter. Immediately reduce the heat to medium, and pour in the stock or water. Scrape up any bits adhering to the pan. Stir up the sauce mixture to redissolve the starch – it will have settled in waiting – and pour it in to the pan at once, stirring well as it goes in. The sauce will simmer up and thicken pretty much at once. Test it for salt, then spoon it over the chops. Serve at once.

Last year at this time I made German Leek Salad.