This was originally posted in August 2012. I reposted this in late June, when the catching season for Lake Peipus vendace began and fresh and smoked vendace was again available, if pricey (going rate for a kilogram of smoked fish was about 20 Euros in June. But, oh so worth it). Now the Finnish vendace – slightly smaller, but just as delicious – has hit the market stalls, and we had pan-fried vendace for dinner tonight. Hence the reposting 🙂

Vendace is a wonderful freshwater whitefish that you’ll find all over the northern continental Europe. The Latin name is Coregonus albula, and although it looks quite similar to the Estonian “national fish” Baltic Herring (räim aka Clupea harengus membras) that belongs to the herring family, then vendace is actually part of the salmonidae family alongside salmon, char, trout, graylings and other freshwater whitefishes.You’re most likely to come across vendace (also called European cisco) in the lakes of Finland, Sweden, Russia and Estonia, as well as some lakes in the UK, Poland and Northern Germany. When I say the lakes of Estonia, I mean Lake Peipus – and must sadly admit that vendace has been scarce in the local waters during the last years.

Imagine my excitement when I saw beautifully fresh vendace at the local farmer’s market yesterday morning! I immediately bought some hot-smoked vendace for lunch, and almost a kilogram of fresh vendace for dinner. It’s such a delicate and excellent fish that doesn’t need much messing around. A quick bath in a seasoned rye flour, followed by frying in hot butter or oil – you’ll find the “recipe” below. I served the fried vendace with a fresh tomato salad, and the meal was enjoyed by all, including the small kids.

A note on vendace roe. The dark orange-coloured vendace roe (rääbisemari/löjrom) is a true delicacy, and Kalix löjrom from  the Swedish Botnia Bay archipelago has even been granted a PDO (protected designation of origin) status by the European Union, just like Prosciutto ham from Tuscany or Parmigiano-Reggiano cheese from Lombardy and Emilia-Romagna. When the rather excellent roe of common/European whitefish (Coregonus lavaretus) cost 799 SEK (Swedish crowns) in a supermarket in Stockholm back in early June, then the vendace roe was almost double the price, 1490 SEK: 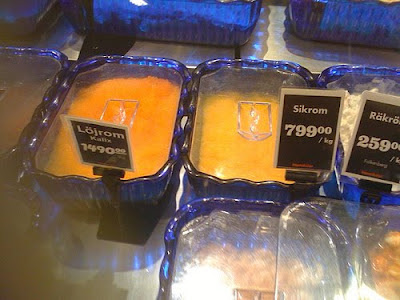 Sorry for the photo quality – it was a quick snap with my mobile phone. Season the flour with salt and pepper, then roll the fish in the flour until evenly covered. Heat some butter and oil (or just one or the other) in a heavy frying pan over medium heat. Add the fish and fry for a few minutes on one side until dark golden brown, then carefully turn over and fry the other side for a few minutes again.

Garnish with a sprinkling of dill and serve with boiled new potatoes or potato mash, and perhaps a dollop of good home-made mayonnaise (be sure to click on the link if you haven’t seen the cool Nami-Nami video recipe yet).