This week’s dining adventure was a visit to Shabu Pub, a hot pot restaurant in the Land Park neighborhood. It opened in 2016 in the space previously occupied by Blockbuster Video, but this was the first time I’d tried it.

Shabu is a style of cooking that involves dipping a variety of ingredients in a boiling broth, similar to a fondue. If you go to dinner at Shabu Pub, you would order a large pot of broth, which would be placed on a burner in the middle of your table. The pot has two sections, so if you’re dining with a friend, you can have two different broths. The vegan options are either the miso or the kimchi broth. The server also mentioned a third vegan broth that isn’t on the menu, which consisted of water, salt, onions, seaweed, and I don’t know what all.

That’s what happens if you go for dinner. I, however, was there for lunch, when Shabu Pub offers a mini pot, an individual pot of broth that comes to the table with its own little burner and with the vegetable assortment already in the pot. I ordered the miso broth, and the vegetable assortment included tofu, udon noodles, cauliflower, zucchini, squash, asparagus, tomatoes, mushrooms, lotus root, green beans, cabbage, and probably a few other things I’m forgetting. It was quite a flavorful and satisfying lunch! 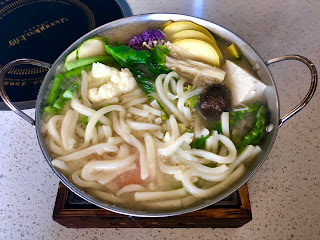 Shabu Pub is located at 4400 Freeport Boulevard, and their phone number is 916-736-1268. They don’t seem to have a website, but their Facebook page can be found at https://www.facebook.com/shabupubsacramento/. The restaurant is open for lunch Monday through Friday from 11:00 a.m. to 2:00 p.m., and for dinner Sunday through Wednesday from 4:00 p.m. to 10:00 p.m. and Thursday through Saturday from 4:00 p.m. to 11:00 p.m.
Share
Previous TANDOORI NAAN / TANDOORI ATTA NAAN / WHOLE WHEAT FLOUR NAAN
Next Sorrel & Goat Cheese Soufflé