The last few years, Mr. Ferdzy has gotten mildly annoyed at my propensity to want to try new peas every year. They take up room, they may or may not be productive, they are something else to store and keep track of. So I was prepared to not try any new peas this year.

When we were ordering seeds though, he said “let’s pick out 3 new peas to try” and I just exercised the smart spouse’s ability to keep their tongue under control; I said “sure” and left it to him to pick some. So! Here we are with some new peas and I have not even had to listen to any grumbling. But the peas – how are they doing?

All these peas came from Prairie Garden, which is where we get our favourite Knight peas from.  I never updated that post! Knight peas do very well for a fast early crop that gets something else planted after it, quite possibly an early dry bean. In spite of selecting varieties from the earliest peas, we did not expect any of these others to be as fast, and we have not been disappointed. Only one of them might do for that technique.

Below, Hatif d’Annonay in the front are just about done, while the Early Onward behind them are just getting started (and flopping all over the path). Behind them, in the next bed in the upper right, you can see the last of the Strike peas, which have distinctive, blue-tinted foliage. 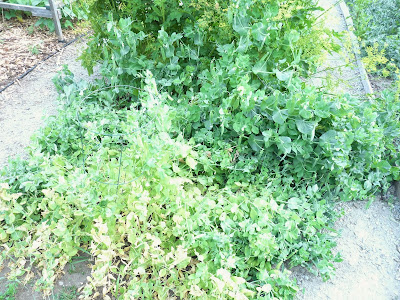 Hatif d’Annonay is the one that might do for succession planting. The plants were impressively loaded with pods, and they are early enough that we could probably use them in the same way as Strike and Knight. On the other hand, both plants and peas seem a bit pale and insubstantial. The pods are small, and don’t contain high numbers of peas. Descriptions say 6 to 8 peas; 6 seems much more typical – at best. I’d say their days to maturity was about 65, which is pushing it – 60 is the number we are aiming for if we are following them with beans. It’s close though. There are lots of other things that could be planted after them.

Mr. Ferdzy placed a spine of tomato cages down the centre of the pea beds, and they seem to have been helpful in keeping things upright. The Hatif d’Annonay have flopped badly though, and they look like dying down quite quickly. The dying down would be fine, if they are to be pulled and replaced; the flopping is a bit annoying. 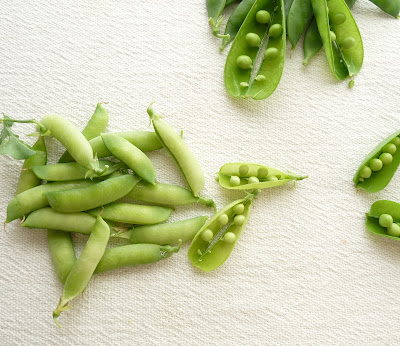 Given their die-away looks and small pods and peas, I was a bit surprised to realize that they are on track to produce a noticeable amount more peas per square foot than the Strike. I may have planted them more densely, though, and the Strike definitely had some problems with germination so they are not as densely planted as usual. The Hatif d’Annonay are tender and tasty, but care must be taken to not let them get overripe as they will get starchy fast. It’s possible their pale and floppy qualities have somewhat to do with how very hot and dry it has been this summer. They might look better in a more pea-friendly year.

They are said to be very cold-hardy – one source said down to -18°C – and I understand that in France they are planted to essentially overwinter, producing peas up to a month earlier than spring-planted peas. The dry (seed) peas are round and yellow, as is common in cold-hardy peas; these contain less sugars than wrinkled green (when dry) peas, which is why you must be so careful not to let them go too long. Even when picked at their peak though, I don’t think they are quite the equal in flavour of the other 2 new peas this year. 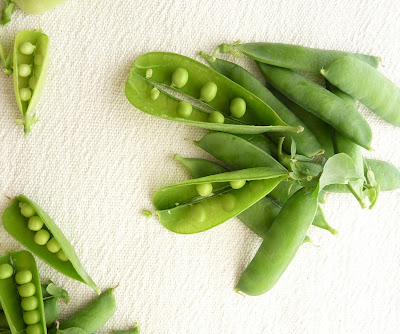 Early Onward is an oldish English pea, not nearly as early as you would suppose from the name. Most sellers say they reach 2 feet in height, but ours are much taller. Mind you, we planted them around some parsnips left to go to seed so they are competing for space (water, light, etc). I did find a few people saying up to 5 feet in height, so maybe most people are just wrong… it happens! Also, sellers tend to give you the height at which peas start producing but they often go on for a fair bit beyond that. Ours have toppled the tomato cage put in the middle of them to keep them upright, and they are only just starting to have a few ripe peas, while the Hatif d’Annonay are essentially over. So, 70 to 75 days to maturity would be my estimate. Definitely a “second early” rather than an early pea, and I think they may produce for a while which would be one of the reasons they are popular with home gardeners elsewhere.

A few sellers have mentioned that they are good for eating the fresh tips as greens. I have not tried them, but since I have an outbreak of trying to grow peas for “dau miu” (pea greens) every few years, I may save a few seeds to test them out at some point. I would say, from the few I have eaten so far, that these are the best-tasting of the 3 new peas this year. In spite of the heat, they are rich, sweet, and tender. I do wonder if we are getting some poor setting due to the heat and drought.

I can’t find much about their history; the date 1908 gets mentioned, and an origin in East Anglia. Beyond that, everyone simply mentions their extreme popularity. And yet, they are very hard to find here in Canada and the only company carrying them at the moment seems to be Prairie Garden.  Again, they are described as having 6 to 8 peas per pod and this year I’d say the figure of 6 is more accurate. 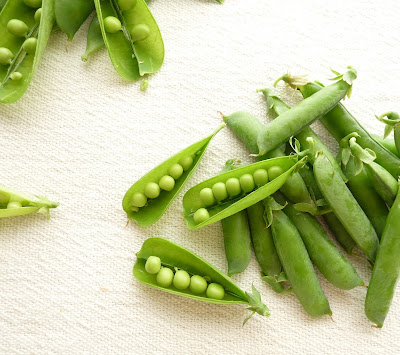 Aristagreen: about the only reference I can find for these says: “Breeder: WECO. Vendor: Ellis. Characteristics: extensive root system under wide range of soil conditions, same maturity as Dark Skin Perfection, very concentrated pod set normally three, three-four, three and three. Resistance: fusarium wilt race 5; tolerance to fusarium wilt race 6. Similar: DST Maturity. 1983.” So there you have it. I don’t see them being sold anywhere but by Prairie Garden.

These are nice, but perhaps not quite as tasty as the Early Onward.  The peas are a little smaller and more tightly packed, but volume produced seems pretty similar. 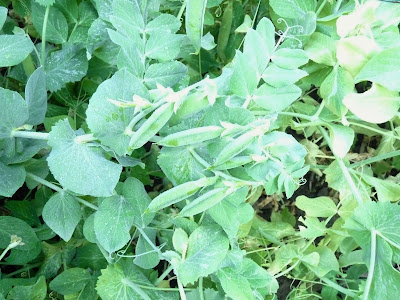 What the description above means when it say “very concentrated pod set” is that all pods are produced at the top of the plant. I was enticed by the description at Prairie Garden, which says “Most pea varieties are double-podded, i.e. having two pods growing at each node, but this is one of three of our triple- (and occasionally quadruple-) podded cultivars (number of pods growing at each node).”

True, but the number of nodes at which peas are produced seems smaller than with other, double-podded varieties. Overall, the amount of peas produced per plant is about on a par with most other varieties.

These also grew quite tall before they started to produce peas; they are probably 4-footers. I suspect they will also turn out to be quite determinate. If properly trellised, that would make them very good for processing (freezing) and pulling. Unfortunately we really don’t want to go to the work of trellising our processing peas, and they are just not quick enough for our 2-crop plan, at a good solid 75 days to maturity. Unless these surprise us and produce a fair bit more than I think they are going to, they are probably out of the picture for future growing.