Home » Breads » Scottish Oatcakes – The Pancake, Not the Paperweight

Scottish Oatcakes – The Pancake, Not the Paperweight 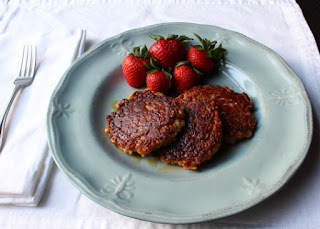 If you Google, “Scottish Oatcakes,” you’ll see lots of pictures of what looks like thick, dense, pressed oatmeal cookies, which is the most common version of this recipe. To be honest, I’m not a huge fan of those, since they tend to be very heavy, and filling, and not really something I want to feature as the centerpiece for a fancy brunch menu.

However, there is another pancake-like version, and this is my twist on that. I should’ve probably come up with my own, more appropriate name, but I really love saying “Scottish Oatcakes,” and it just sounds like something you’d want to eat for breakfast. 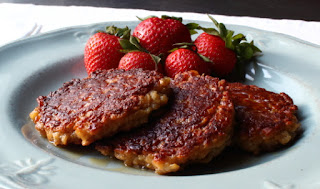 Once you mix up your batter, you can cook it right away, which produces something that looks identical to what we have here, except the texture will be much more toothsome. I do enjoy that approach, but if you let the mixture sit for a while, the oats continue to soften, resulting in a creamier center. I’ve also let this go overnight, which will give you a texture very similar to actual oatmeal.

Regardless, you’re still going to get a beautifully browned, crusty exterior; and it’s that contrast that makes this so unique. Some people like to add dried fruit to these, but I do not. The same goes for the traditional pinch of cinnamon, since I really don’t want these to taste like oatmeal raisin cookies. As usual, suit yourself, but either way, I really do hope you give these great oatmeal pancakes a try soon. Enjoy!

(this is only 2 portions, so feel free to double or triple the recipe)
1 cups *rolled oats
1 cup heavy cream
1 teaspoon lemon zest
2 teaspoons lemon juice
1 large egg
1 teaspoon honey
1/4 teaspoon fine salt
1/4 teaspoon baking soda
1/4 cup **self-rising flour
1/4 cup melted butter for panfrying
* I used the regular kind, but if you have to use the instant ones, I probably wouldn’t cook them. I’d just mix them with the cream, and let it sit until the mixture thickened up. By the way, this is just a theory, as I’ve never attempted.
** If you don’t have self-rising flour, just add 1/4 cup of all-purpose flour, plus 1/2 teaspoon of baking powder, and an extra pinch of salt.
Share