Here’s another one inspired by an old cook book. As usual I forgot to note which one, but it was something English and mid to late 19th century as far as I can recall. It is pretty rare for me to pull out anything interesting from cook books of that era at this point, but this one caught my eye.

The filling ingredients are more or less as in the original, but they wanted you to put everything in in layers, which did not strike me as the best plan. This is actually my third attempt at this pie. I started off with leaving the rutabaga in chunks and pre-cooking the sausage, but that made them just things enclosed in a pie crust, rather than an actual pie. This final version is simpler and works better; always a pleasing combination.

Admittedly this is still a bit time consuming, but it is not difficult. Mostly you have to wait for the rutabaga and then the pie to cook. It would certainly make sense to use left-over mashed rutabaga for this. It was impressive that 4 cups of diced rutabaga cooked down to 2 cups mashed, but so it was; take note.

I am also quite taken with this pie crust. It is easy to work with, and ideal for savoury pies, being nicely sturdy without being heavy. 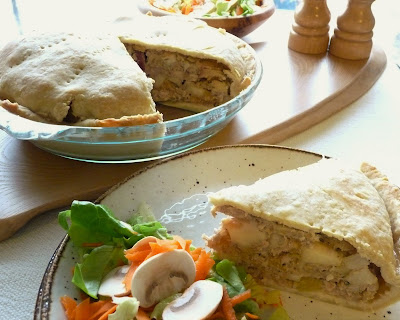 Mix the flour and salt in a mixing bowl.

In another, smaller, bowl put the softened butter and mix in the oil, buttermilk, and egg. It need not be well mixed; just be sure the yolk is well broken up and the butter isn’t in a single massive lump.

Mix the wet ingredients into the flour. Using your hands if required, form it into a ball of dough. You can press and turn it to get everything incorporated, but try not to overwork it. Cover with a cloth and set aside until needed. Do this once the rutabaga is on to boil.

Peel and dice the rutabaga, and put it in a pot with water to cover. Bring to a boil and boil gently for 40 minutes until tender. Drain it, mash it, and set it aside in a mixing bowl. Once mashed, there should about 2 cups of it. Let cool enough to handle

Peel and mince the shallots, and add them to the rutabaga. Peel the casings off the sausage meat, and crumble it in. Grind the coriander seed and add it, along with the pepper. Salt will depend on how salty the sausage is – in general sausage is quite salty. I added a little shake just to make sure everything was seasoned, and otherwise relied on the sausage to provide salt. Peel the apples or not, as you like. Core them and chop them, and add them to the bowl. Mix it all well – it is easiest to use your hands.

Divide the pastry into 2 uneven portions; 60% and 40%. Roll out the large piece on parchment paper with a little flour sprinkled over to avoid it sticking. When it is large, thin, and round enough, flip it into a 10″ pie dish and peel off the parchment paper. Press it neatly into place. Clean and re-flour the parchment paper, and roll out the remaining pastry to fit the top.

Tip the filling into the prepared pie crust, and press it snug and slightly mounded in the middle. Cover it with the prepared pastry top, and seal it well around the edges. Poke holes in the top to let the steam escape.

Bake the pie for 1 hour and 10 to 15 minutes at 350°F, until nicely browned and bubbling. Let rest at least 15 minutes before serving it.