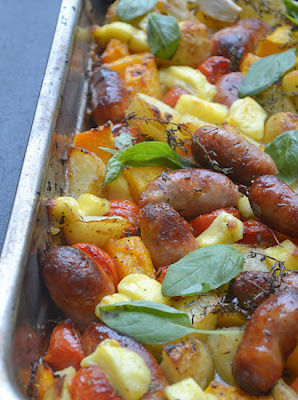 A garlicky tray-bake in jewel colours that doesn’t take long to put together and tastes gorgeous, especially if you finish it off – wickedly – with halloumi cheese and a handful of fresh basil leaves.

I often make all-in-one tray-bakes for family dinners – usually with chicken and veggies – because they’re easy, and involve so little washing up. This is a good recipe for feeding a stampede of teens, because it stretches 12 sausages into a filling meal for six people (oh, okay, four, if you have very voracious teens).

The pork sausages add a lovely meaty flavour to the dish, but it’s a good idea to drain the excess fat away half-way through baking, or you’ll end up with veggies up to their waists in a golden puddle.

You can use either pumpkin or butternut here; I prefer pumpkin cubes (ready-cut ones, of course) because they have a denser texture. The halloumi at the end is an indulgence: use feta if you’d like something a little lighter, or leave the cheese out.

A handful of fresh herbs added at the end of cooking freshens up the whole dish.  I like basil because it adds a faint but intriguing aniseed note, but you could use rocket or flat-leaf parsley, or even some peppery watercress. 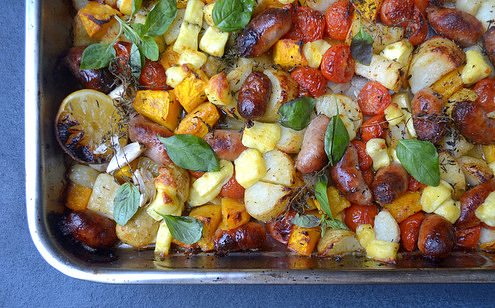 It isn’t strictly necessary to parboil the potatoes before you start, but I recommend it, because it prevents the potatoes from turning leathery as they roast, and they will also be crisper.

To cut down on time and dishes, I parboil them in the roasting tin before adding the other ingredients and slinging the dish in the oven. 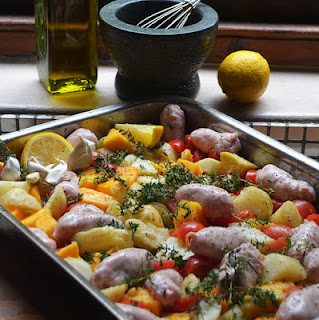 Heat the oven to 190 ºC. If you have an oven fan, heat it to 180 ºC.  Boil the kettle. Cut the potatoes in half lengthways, and then slice them into thick chunks. Place in a large, deep roasting tray and cover them to three-quarters of their depth with boiling water. Turn on a fierce heat under the pan, add the salt and cover loosely with a large sheet of tin foil. Set the timer for exactly 7 minutes. In the meantime, whisk together the olive oil, lemon juice and garlic, and set aside. Twist each sausage half-way along its length to make two smaller ones, and cut through the new link with a pair of scissors. Cut the tomatoes in half crossways.

After seven minutes, drain the water off potatoes – don’t worry if they’re still a little wet –  and put the pan back on the hob. Turn down the heat and cook for a minute or so, tossing the pan energetically, until all the water has evaporated and the potatoes are a little roughened at the edges. They’ll begin to squeak when they’re nice and dry.  (Watch the pan like a hawk as the spuds will burn fast through the thin bottom of the pan.)

Take the pan off the heat and pour the olive oil mixture over the hot potatoes. Add the tomatoes, pumpkin and thyme sprigs. Season generously with salt and black pepper and toss everything together so each piece is coated with dressing.  Tuck the sausages into the veggies (try to place them over the tomatoes, so they don’t prevent the spuds from browning). Bake at 190 ºC for 40-50 minutes, or until the sausages are nicely browned and the potatoes and pumpkins beginning to turn golden. Turn the sausages over, using a pair of tongs, then tilt the pan over a bowl and drain off all but a few tablespoons of the fat.  If the veggies look a little dry, paint a little of the drained fat over them using a pastry brush.

Return the pan to the oven, turn down the heat to 170 ºC (180 ºC if your oven has no fan) and roast for another 20-25 minutes, or until the pumpkin is very tender. Cut the halloumi cheese into cubes and scatter them over the vegetables. Turn on the oven grill and cook for a further 4-5 minutes, or until the cheese is soft and beginning to turn golden on the corners.  Scatter the basil leaves over the pan and serve immediately.  A spritz of lemon juice just before serving gives this dish a lovely lift.