A friend on Twitter told me recently about a new place, Rossi Catering & Deli,  that opened in Tahoe Park last month. He said they had some vegan options on the menu, so I went to try it out last week.

The menu offers two salads that are vegan without requiring any changes — a fruit salad and a local bean salad. I passed on the fruit salad, but I purchased a container of the very tasty bean salad.

In addition, they offered two items that could be made vegan — a Caesar salad that could be ordered without cheese and with a vegan dressing, and a summer vegetable sandwich that could be ordered without cheese. I purchased both items and they were quite good. The person working the counter didn’t know whether the pesto that normally comes on the veggie sandwich was vegan or not, so I opted to leave it off. The sandwich, which was served on focaccia, included dried tomato tapenade, eggplant, zucchini, peppers, and mizuna. 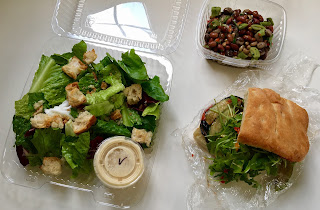 Rossi Catering & Deli is located at 5774 Broadway, and their phone number is 916-400-3286. Their website address is http://rossicatering.com/, and their Facebook page can be found at https://www.facebook.com/rossicatering916/. I found out their hours the hard way when I tried to go there for lunch on a Saturday — they are open only on weekdays. Their hours are Monday through Friday from 10:00 a.m. to 2:30 p.m.