Cucumber boats filled with red cabbage slaw make a simple but very visually striking salad and they combine very nicely in the mouth too.

It’s a bit hard to say how many cucumbers this amount of slaw will fill; it will depend on the size you get and to some degree you will have to eyeball it. I only had enough to fill 3 cucumbers (6 halves) but mine were unusually large for greenhouse cucumbers. This made them easier to stuff probably, but also meant they made rather large servings. That’s okay if they are your salad at a meal, but if you want them as an appetizer or hors d’oeuvre, it would be better to get smaller ones. 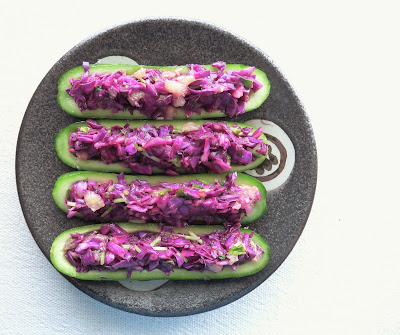 Wash, trim, and finely shred the cabbage. Massage it with the salt until it feels quite wet, then place it in a strainer and drain for about 1/2 hour.

Meanwhile, slice the cucumbers in half lengthwise. Use a grapefruit spoon or other thin-edged spoon to scoop out the cucumbers; all of the seedy area should bring you to within a quarter inch of the sides, which is good. Chop the scooped-out flesh and mix it in with the draining cabbage.

Salt the insides of the cucumbers, and set them aside.

Wash, trim, and chop the pea shoots or parsley, and mix them in with the cabbage.

Last year at this time I made Duck Terrine Roasted in the Duck Skin.