I actually feel kind of silly blogging about Pushkin’s Restaurant since, judging from all the photos showing up in my Facebook newsfeed, it seems as though every vegan in town has already been there. But in case there are still a few people out there who haven’t heard, Pushkin’s Bakery opened a restaurant in midtown last month and it’s been a big hit with local vegans. 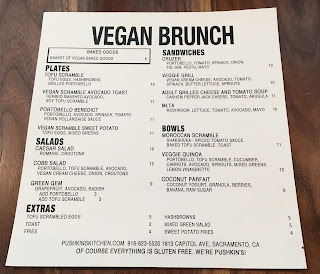 The menu at Pushkin’s Restaurant is 100 percent gluten-free, but they also offer a separate menu that’s all vegan. I had lunch there last week with my friend Cathy, and I had a terrible time trying to choose from among all the vegan options. I finally decided on the refreshing Green Gem Salad, with butter lettuce, grapefruit, avocado, radish, and a lemony vinaigrette. I had Portobello mushrooms added for an extra charge. 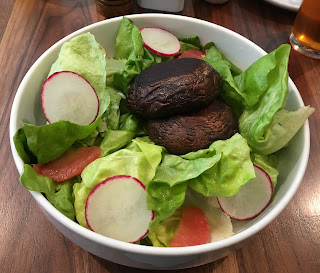 I really wanted to try the Coconut Parfait for dessert, but they were out of them. Instead, I checked out the baked goods in the display case and found three vegan options –double chocolate walnut cookies, chocolate chip muffins, and barracuda cupcakes. As you can see in the picture below, I opted for the fabulous barracuda cupcake. 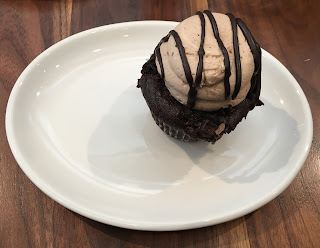 Pushkin’s Restaurant is located at 1813 Capitol Avenue, and their phone number is 916-823-5520. Their website address is http://pushkinskitchen.com/, and their Facebook page can be found at https://www.facebook.com/pushkinsrestaurant/. The restaurant is open Tuesday through Sunday from 8:00 a.m. to 3:00 p.m.
Share
Previous Baked Ravioli with a Vodka Cream Sauce
Next Fudgy Brownies