I saw this recipe for Poutine gravy and thought I had to give it a try. As usual I have put my sticky hands all over it, not to mention that I found the quantities required to be more than a little vague for certain key items.

I tried to intensify the meatiness of it by concentrating the stocks, and also flavouring them with shiitake stems. I keep them for stock making, since I did pay upwards of $12 per pound for them, but they tend to pile up. This was a good use for some but if you don’t have them you can certainly leave them out. I also used toasted barley flour for the flour as I like the extra layer of flavour it brings to soups and sauces. My finished gravy was a bit thicker than the photos suggested, but I was okay with that. It may be that I was a little short on liquid (since I am guessing as to what constitutes une boite). For perhaps the same reason I found the amount of ketchup just a tad high so next time I intend to replace one tablespoon of it with a little paprika.

When all is said and done though, this was the most delicious poutine we have eaten in quite some time. Yeah, yeah, it’s been quite some time since we have eaten any poutine. Next time is going to come a lot sooner though, because this is GOOD and not at all hard to do, in spite of the fairly detailed instructions. 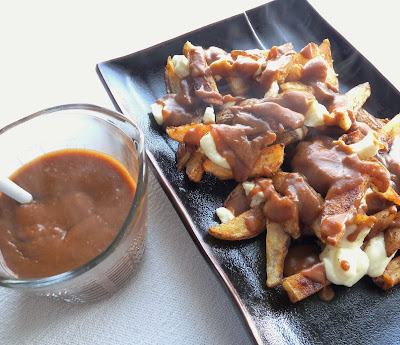 Wash and trim – peel if you like – the potatoes and cut them into a thick classic French-fry shape. Put them in a pot with water to cover and boil them for about 8 minutes. Drain well but carefully so as not to break them.

Spread them on a baking tray in a single layer and toss them in enough oil to coat them lightly. Season with a little salt and pepper but don’t get too carried away as the cheese and gravy will have lots.

Roast them for about 1 hour, turning them halfway through the process, until browned and crisp. When done, sprinkle the cheese curds over them and return them to the oven for 5 minutes. Meanwhile…

Let the potatoes cook for about 20 minutes before starting the gravy.

Put the beef stock, chicken stock, bay leaf, and shiitake stems – if you have them – in a pot. Bring to a boil then reduce to a simmer and simmer until the volume has been reduced by 1/3 to about 3 cups. This should take 15 to 20 minutes. Strain out the bay leaf and mushroom stems.

Peel and slice the garlic. Measure out the last 1/4 cup of chicken stock and mix in the corn starch, ketchup, paprika, and Tabasco sauce. Set aside.

About 5 minutes or so before the stock is ready, toast the barley flour in a dry skillet until it is paper bag light brown. Remove it from the heat and add the butter and garlic slices, stirring well until the butter is completely melted and the flour is all combined. If you are using wheat flour, melt the butter first then stir in the untoasted flour.

Return the pan to the stove over low heat and cook, stirring, for about 2 minutes. Slowly mix in the hot, strained stock stirring constantly to form a smooth sauce. Give the remaining ingredients (chicken stock, starch, etc) a good stir and mix them slowly into the gravy.  Stir constantly until the gravy thickens, just a few minutes. Test the seasoning and add salt and pepper as required.

When the potatoes and cheese curds are ready, drizzle hot gravy over them ad lib and serve at once.

Last year at this time I made Cabbage with Leeks & Mushrooms.