I developed this recipe around six or seven years ago after a friend gave me an old recipe clipping from her late mother and ask if I could make it healthier. Since then it has become a big hit and I have made it many times for friends, church functions, gifts, and community luncheons. It makes a great holiday cake with a little “fake” powdered sugar* drizzle over the top.

In a medium to large mixing bowl, using an electric mixer, beat eggs and egg whites.  Add the oils, applesauce, Brown Sugar Blend and the Splenda Granulated; beat until creamy.

Add the  flour, baking soda, and cinnamon, beating at medium to medium-high speed to blend well. Blend in the vanilla.

Using a large spatula or wooden spoon, mix in the pears, coconut, and pecans until well combine.

Spray a Bundt pan with the cooking spray and pour the batter evenly into the pan.

Bake at 350 degrees for 50 to 55 minutes or until a wooden toothpick inserted in the center comes out clean.
*May use 1 cup of canola if you don’t have olive oil. 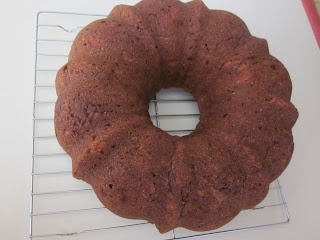 Remember this is a dessert. Share it with family and friends. It freezes well and keeps fresh when covered in the refrigerator for several days. If you are making for yourself or yourself and one other, cut into serving slices, slip each slice into a quart baggie. Place several baggies of slices into a large gallon baggie and freeze. You can then take out one or two slices as needed. That will keep you from over-indulging!