Not sure this quite constitutes a recipe, but it is what is happening around here at the moment. A few days ago we dug up a bushel of parsnips to make way for peas.

Parsnips are available all winter for purchase and well into the spring, but it turns out that now we are growing them we mostly eat them in the spring. It is very nice to be able to go out and dig something new to eat as soon as the ground is sufficiently thawed.

I was hoping these would form into nice little patties like proper potato hash browns and it isn’t impossible, but they aren’t really into it and so I just left them in a loose pile. Just as good!

I served these with eggs, and that was okay, but eggs are a little delicate in flavour next to the parsnips. I have to admit that what I really see these going with is pork; bacon, peameal, sausage, chops; whatever. Maybe next time. There is still three-quarters of a bushel to go. 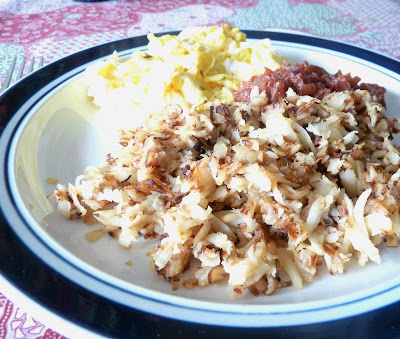 Peel and grate the parsnips coarsely.

Heat 1 tablespoon of the bacon fat until melted and sizzling in a medium-sized skillet. Add the grated parsnips, stir well to toss the parsnips in the fat, and reduce the heat at once to medium-low. Dot the remaining bacon fat over the parsnips, and mix in. Season with the salt and pepper. Do be mindful of how salty your bacon fat may be.

Cook for 10 to 15 minutes, stirring occasionally. The parsnips should brown fairly evenly, and not too quickly. If they are browning too quickly, reduce the heat. If they are scorching, you may need to add a little more bacon fat.

When the parsnips are done to your liking, serve them up. Don’t be dismayed by what a big pile of parsnips first go into the pan – they reduce considerably in cooking.