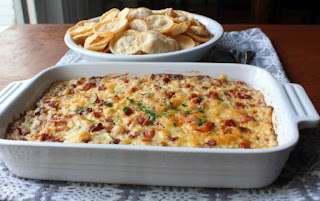 Truth be told, this New England Clam Chowder Dip is actually the first soup I’ve ever turned into a dip, but I still stand by my title. After all, what are soups, if not really thin, hot dips you eat with a spoon?

The point is, while this may be my first soup-to-dip conversion, it’s probably not going to be my last. I’m looking at you, Mulligatawny.

I thought I was inventing something new here, but of course, like everything else, many people had already given this a go. The funny thing was, every recipe I looked at called for this to be served with sliced bread, which I thought was odd. To me, potatoes are like the second or third best ingredient in a chowder, so why not serve this with chips?
Besides that, my other big improvement was to up the bacon content. Some recipes called for as little as two slices. Two slices of bacon? What am I supposed to do with that? So, I went with three times as much, and it turned out to be a very good decision. While quite “bacon forward,” the clam flavor still came through, and all in all, this really was very chowder-like.
The only semi out-of-the-ordinary ingredient used was a spice blend called, “Old Bay.” This is not very hard to find in the big grocery stores, but just in case, here is a link to make a your own. Besides, even if you have some in the pantry, it may have been there for quite sometime, and while Old Bay works well, old, Old Bay may not, so it might not be a bad idea to make a batch anyway.  Either way, I really do hope you give this a great hot dip a try soon. Enjoy!
Ingredients for one small casserole dish:
6 slices of bacon, cut into 1/2-inch pieces
1/2 cup chopped green onions
1/3 cup diced celery
1/2 teaspoon salt, plus more if needed
1 pound cream cheese, room temp
4 ounces white cheddar
1 teaspoon Worcestershire sauce
1/2 teaspoon freshly ground black pepper
1/2 teaspoon Old Bay seasoning
2 cans (6 1/2 ounces) chopped clams, drained
2 tablespoons freshly chopped Italian parsley
pinch of cayenne for the top
potato chips to serve alongside
Share