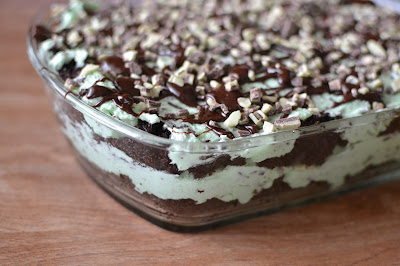 I made this by accident once. I think those are the best kind of recipes:) I was going to make a mint cake, but it turned out weird, so I turned it into a trifle. Cause, you know, you should improvise when things don’t go as planned. 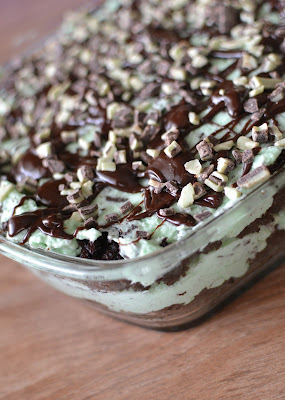 It’s turned out to be one of the favorites of my friends and family! It’s rich and refreshing at the same time. Mint will do that. I also love how trifles are kind of messy. You just throw everything into layers and BOOM you’re done. It’s the best!
1 recipe of my homemade brownies (found here) baked in a sheet cake pan so they are thinner
1 recipe Fluffy Mint Buttercream (recipe follows)
1 bag chopped Andes mints (found in the baking section)
1 jar hot fudge
After baking brownies, let them cool completely. Then cut them into small 1 inch cubes. Put a layer of brownies in the bottom of a trifle bowl (or any bowl or container you choose), drizzle 1/4 cup of hot fudge over brownies, top with a layer of Fluffy Mint Buttercream, then sprinkle a layer of chopped Andes mints. Repeat layers until all ingredients are used. Enjoy!!
Fluffy Mint Buttercream
2 sticks butter, at room temperature
3 1/2 cups powdered sugar
2 T heavy cream
1/2 t peppermint extract (more if you like it strong)
1 cup heavy whipping cream

In the bowl of an electric stand mixer, using the whisk attachment whip butter on high speed until nearly white and very fluffy, about 7 – 8 minutes, frequently scrapping down the sides of the bowl. Add in powdered sugar, 2 T heavy cream and peppermint extract and mix on low speed until blended, then increase speed to medium and beat until very light and fluffy, about 5 – 6 minutes, frequently scraping down the sides of the bowl. In a separate bowl whip the whipping cream until stiff peaks form. Fold into the buttercream.