Home » cakes » MINI PEAR-NUT CAKES (OR MUFFINS, IF YOU PREFER)

MINI PEAR-NUT CAKES (OR MUFFINS, IF YOU PREFER)

This is my original recipe. These are so good I get requests for them all the time. Many of those requests are from people who are not diabetic.

4 cups diced pears
3/4 cup Splenda granulated
Combine together and let stand for about 10 to 20 minutes.

In a large mixing bowl combine the Splenda, canola oil, applesauce, and eggs; cream together well.  Combine the flour, baking soda, cinnamon, and salt; add 1 cup at a time to the creamed mixture alternately with the pears.  Beat well after each addition.  Mix in the vanilla then stir in the nuts.

Spray 24 muffin cups with nonstick cooking spray.  Divide the batter between the cups.  Bake at 350 degrees until the cakes are done and a wooden toothpick inserted in the center comes out clean.  (I have never watched the time but I think it takes about 20-25 minutes.) 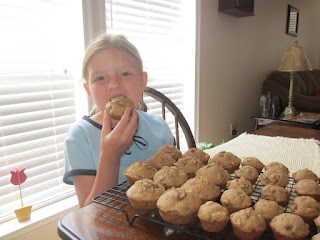 *You could also substitute 1/4 cup ground flaxseed for half the canola oil.