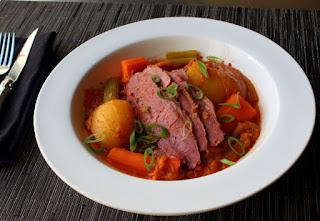 I’ve always loved St. Patrick’s Day, since apparently that’s the only day of the year I get to eat corned beef and cabbage. Besides the copious amounts of salt, nitrates, and fat, I have no idea way we’re not eating this stuff a couple times a week. Anyway, because this is usually an annual thing, most folks make it the same way, year after year, but that’s never been my M.O. I like to think of ways to creatively tweak the recipe, so that while I’m enjoying my new creation, I can think about how much I’d wished I just boiled it in water, with that little packet.

What I’m trying to say is, not every attempt has been a homerun. Or whatever a homerun in Irish hurling is. This, however, was a success. The spicy, fermented cabbage, added a lot of extra savoriness, and not only to the meat, but even more so to the vegetables.  The potatoes especially soaked up a surprising amount of flavor, and may have been my favorite part of the whole dish. 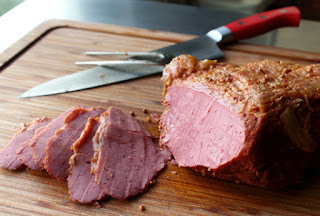 I used a corned beef made from the round, instead of the traditional brisket, which worked out much better than I thought it would. If you do decide to go this lower fat option, be sure not to cook it too long. The fork should pierce the meat without too much force, but we do not want to meat falling apart, as it will become dry and chalky. Chances are you’re going to use a brisket anyway, which is much more forgiving, but something to keep in mind if you do go with the round. Either way, I really do hope you give this a try soon. Enjoy!