When I blogged about Kasbah Lounge in midtown a few years ago, it was owned by the same family that owned the restaurant next door, Tapa the World. A vegan menu had been compiled from the menus of both restaurants, and you could order items from Kasbah even if you were eating at Tapa the World, and vice versa.

Since then, Kasbah Lounge has been bought by two former Kasbah employees and is now run separately from Tapa the World. So my husband Phil and I stopped in for dinner at Kasbah over the weekend to see if I could still find something vegan to eat.

I’m happy to report that putting together a vegan meal was easy. The only thing actually listed on the menu as vegan is the harira soup, but there are some vegetarian items that can easily be made vegan. But since the harira was vegan, I started with that. It’s a flavorful lentil soup delicately seasoned with cinnamon and other spices. It was topped with fried onions and served with pita triangles. Delicious! 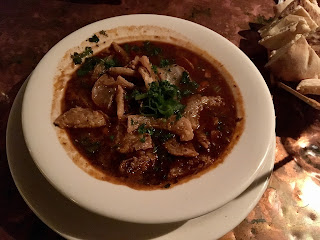 I followed the soup with the mezza platter, an assortment of Middle Eastern appetizers that I ate as my entrée. The platter included hummus, olives, falafel, tabbouleh, baba ghanoush, tomatoes, pickled vegetables, and tahini sauce. Normally, it includes yogurt and feta cheese, but I asked that those items be omitted from my platter.

I didn’t order it, but another option you may want to consider is the vegetable kabob. I asked recently on Kasbah’s Facebook page if the kabob was vegan, and here’s the response I received: “Sub the yogurt for baba ganoush and the rice (cooked in veg broth but has butter) for coriander roasted sweet potatoes and voila it’s vegan!” I’ll give that a try next time I visit.
Kasbah Lounge is located at 2115 J Street, and their phone number is 916-442-4388. Their website address is http://www.kasbahlounge.com/, and their Facebook page can be found at https://www.facebook.com/kasbah916/. The restaurant is open Sunday, Tuesday, Wednesday, and Thursday from 5:00 p.m. till midnight, and Friday and Saturday from 5:00 p.m. until 2:00 a.m.
Share
Previous Cinnamon Cream Cheese Coffee Cake
Next Turkish Cheese and Herb Cigars Recipe