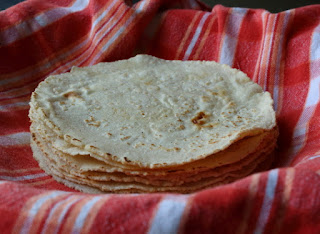 Even though they only require a few of ingredients, and the technique to make them only takes a few seconds to learn, homemade corn tortillas do take a fair amount of experience to master, because of all the variables. But, don’t let that stop you from trying, since the results, even as produced by a novice, are vastly superior to ones from the grocery store. They’re also significantly cheaper, but the “vastly superior” part is more than enough reason.

That’s because a bag of Maseca, which is the most commonly found brand of masa flour in U.S. grocery stores, and the one I used, is very inexpensive, and will make hundreds of tortillas. So, the instant corn masa flour isn’t a variable, but pretty much everything else is. From the amount of water, to how much salt, to how hot a pan to use, to how long to cook them; everyone seems to have a little bit different system.
When it comes to the water, you’ll know you have the right amount, if your tortillas press out to a nice round, relatively smooth-edged shape. If the outside edge of the tortilla has cracks once pressed, then you need more water. On the other hand, if the tortilla sticks to your fingers, or breaks apart getting it off the plastic, then it was too wet. Adjust accordingly. And like I said, give yourself a few years to experiment.
As far as the pan, I go with a cast-iron skillet, which I get nice and hot over high heat, and then I’ll back it down to about medium while I cook my tortillas. I also tend to cook mine a little longer in the pan than is traditional, but I enjoy that nice, lightly-toasted corn flavor you get when a little bit of browning occurs. A few extra seconds in the pan is fine, as long as they are stacked, and wrapped in the towel, which is probably the most important step in the entire operation.
In fact, eat one of these right from the pan, and then compare it to one that you’ve let steam together with the rest of the tortillas in the towel. You’ll be truly amazed at the difference. So, if you enjoy store-bought corn tortillas, but always wondered what the real stuff was like, I hope you give these a try soon. Enjoy!
Ingredients for about 10 Corn Tortillas:
1 cup instant corn masa flour (aka masa harina)
1/2 teaspoon kosher salt
3/4 cup hot water (about 130 F.)
– adjust with more water or masa flour as needed
Share