Haskaps aren’t quite ripe yet – I made this last year. Given that they have about a two-week season though, you should be ready for them when they are ready.

Given the proportion of rhubarb to haskap that I used, I expected this to taste much more rhubarby. It’s there in the background but that mysterious unidentifiable haskap flavour predominates. Quite delicious, in fact.

I like this best mixed with club soda and drunk cold, but I mixed some with some hot tea and that was surprisingly good.

This was made with drinks in mind; it’s a little thin for pouring over ice cream, yogurt, etc. but if you don’t mind it being thin that would certainly be tasty. 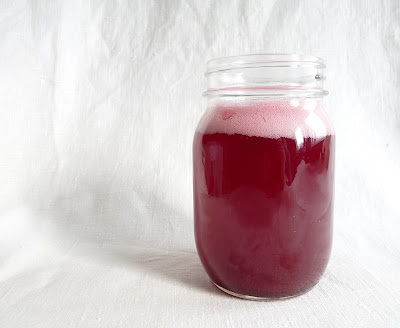 Wash and trim the rhubarb, and cut it into dice. Wash and pick over the haskap berries. Put both into a pot with the water, and bring to a boil. Simmer steadily for 10 to 15 minutes, stirring occasionally.

Put the mixture in a jelly bag or clean old pillowcase (now in use solely as a jelly bag) and suspend it over a pot – it can sit in a strainer as long as the strainer will not touch the liquid in the pot. Strain overnight. You can squeeze the bag to get as much liquid out as possible.

Put the jars to be filled into a canner and cover with water to an inch above their tops. Bring to a boil and boil for 10 minutes. As the water approaches the boil, put the fruit liquid into a kettle and add the sugar. Bring it up to a boil and boil for about 5 minutes. You should also have the lids and rims in a pan of water, and boil them for 1 minute.

Remove the jars to a clean board, tipping half the water in them back into the canner of boiling water. Fill the jars with the hot syrup. Wipe the rims carefully with a piece of paper towel dipped in the boiling water, then put the rims and lids on and finger tighten. Place the jars back in the canner and boil for 10 minutes.

Either let the jars cool in the canner, or remove them 5 or 10 minutes after being removed from the heat and let them cool on the clean board. Check the seals. Store in a cool, dark spot. Keep refrigerated once open.

To use, mix with cold or boiling water, club soda, or tea in the proportion of 1/3 to 1/2 syrup to other liquid. Should keep, unopened and properly stored, for 1 year.

Last year at this time I made Rhubarb-Almond Crisp.