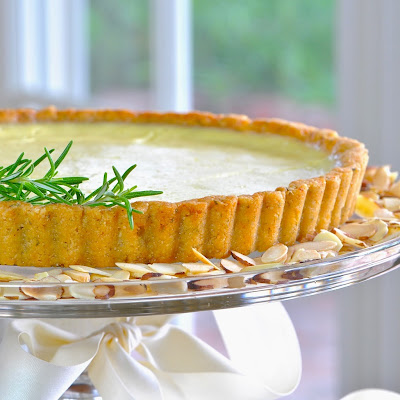 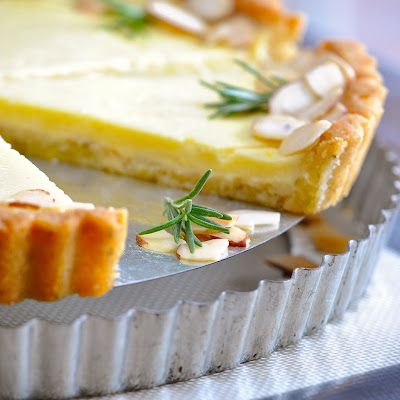 sweet tart lemony citrus desserts are so refreshing especially this lovely tart with it’s little rosemary kick.
i seem to forget about lemon desserts.  they get pushed aside for the dark chocolate, the savory peanut butter and the gooey caramel goodies.  i often post about bacon, chocolate, pig ears, pork belly and various decadent sweets and savories, but i bet you’d never guess… i actually DO eat a lot of yogurt, egg whites, grilled fish, steamed vegetables, aloe vera, kombucha, blah blah blah…
i call it my “yin and yang theory”.
a little good and a little bad keeps everything in balance.

but…about this recipe…
i’d say it weighs in on the “good for you” side.  i found the original lemon rosemary tart on pinterest at Good Things Grow and pinned it to my “must-try” board.  i finally got around to it, but wanted to make a gluten free crust.  i am not gluten free, but i love to experiment and i have a few gluten free friends.
the original almond crust comes to you from Flourishing Foodie.  i love the almond flour crust idea so i just added the fresh dried rosemary…delicious.  the crust was crisp out of the oven and would be perfect served the day of, but alas…i needed to shoot the tart the next day so i stuck the finished product into the fridge.  the crust lost it’s crunch, but was still a winner.  i would compare it to a cheesecake style crust.  it holds up and slices well, but got a little moist after refrigeration.  solution?…i added some crispy lightly toasted almond slivers to the servings and “voila”…the crunch was back in the mix.. 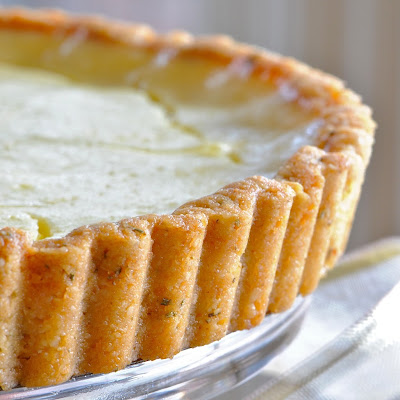 in a food processor add almond flour, sugar, salt, rosemary, butter, vanilla bean paste and egg white.  pulse until all ingredients are combined and start to stick together, resembling coarse meal…do not over blend…it will get mushy and ball up.

put mixture into tart shell and press out with your hands and form up the sides of the shell.  create an even layer.  i used a flat glass to lightly tamp  it down.  it will seem quite thin, but will cook to a nice crust as shown.

bake on middle rack for 15-20 minutes, or until it is light brown.  remove from oven and cool completely. 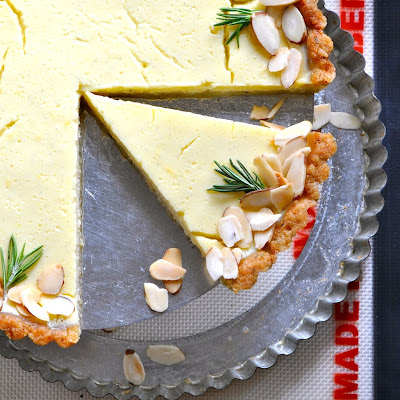 preheat oven to 350F
place yogurt, vanilla bean paste and sugar in a medium bowl and whisk until thoroughly combined.  whisk in the egg, one at a time, then add the lemon juice and zest.  whisk until completely smooth.

pour into prepared tart crust.  i poured as much as i could and only had 1-2 Tbsp left over.
BAKE at 350F for 25-30 minutes or until the center is set and only slightly jiggles.  mine was in for 28 minutes and i could have pulled it at 26 minutes.  as you see i had a few cracks, but it was not over cooked.

allow to cool completely.  stick it in the fridge for just a slight chill and a complete “set”…i refrigerated mine over night and the crust got a little moist.  it resembled a graham cracker crust, but still delicious.  i think it would be best to slightly chill and serve the day of.  this tart served very well.  it might be a bit more crumbly (not a bad thing), yet…crunchy and crisp if served the day of. 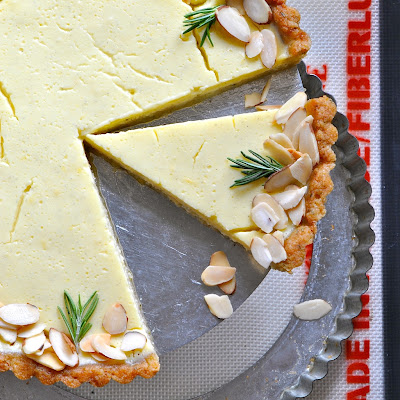