In my Russian cutlet research wanderings, I came across these Gomel Style cutlets. Gomel is a city in Belarus, about 200 kilometres north of Kiev. These are not nearly as well known as the cutlets of Kiev, but I have to say I liked them a lot.

Traditionally they seem to be made with very thinly pounded pork scallops, but many people do suggest making them with chicken. Since I can’t be having with pounding pieces of meat, I used ground turkey. I did see some recipes out there calling for ground meat so I don’t feel like I have gone too far astray.

The potato coating before they are fried are what make these really unique, although the mushroom and cheese filling is somewhat unusual as well. Some recipes called for these to be finished in the oven and some didn’t; my experience was that it took long enough for the potato coating to cook in the pan that the cutlets were definitely done by the time the potatoes browned, so I didn’t bother to bake them. I suspect they would be reasonably amenable to being kept warm in the oven if that is required though.

I found them a little nerve-wracking to form, but they came out much better than I expected. I’m giving fairly detailed instructions on how I did that. Once they were in the pan they pulled themselves together nicely. I suspect I’m going to try coating other things in grated potato and cooking them like this too – it worked really well. 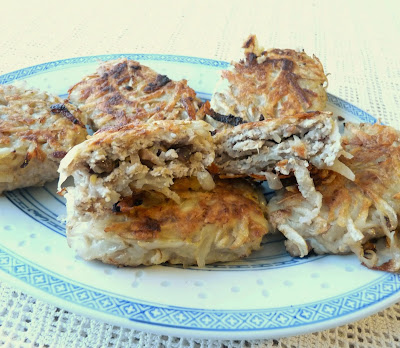 Clean, trim, and chop the mushrooms. Peel and mince the shallots.

Heat the butter in a small skillet, and cook them together until the shallots are softened and translucent, and the mushrooms are softened and slightly browned. Season with a little salt and pepper; keep in mind the cheese is quite salty. Transfer them to a small mixing bowl to cool. Grate the Parmesan and add it once the vegetables are cool.

Crumble the roll into a mixing bowl, and pour the milk or cream over it. Let it soak until the cream is absorbed. Add the remaining ingredients and mix until smooth.

Break the egg into a small bowl and whisk with a fork until smooth. Put the flour into another small bowl.

Wash the potatoes (peel them if you like, but you will need the weight above when peeled). Grate them coarsely. Season them with the salt and let them sit in a pile on the cutting board. Do not do this until you are ready to start forming the cutlets, or else the potato may turn dark as it sits.

Take one sixth of the cutlet mixture and form it into a flattened patty. Drop it into the bowl of flour. Take one sixth of the mushroom filling, and squeeze it until it holds together. Put it in the middle of the patty, and fold it up around the filling until it is covered – hold it in your hand and shape it. Once the filling is covered, roll the cutlet in the flour to evenly coat it. It will be round to ovoid in shape at this point. Roll it in the egg, allowing as much egg as is reasonable to drip off back into the bowl before rolling it in the pile of grated potatoes. Set it aside gently on a plate until you are ready to cook them.

When you have only 2 or 3 more cutlets to form, put 2 tablespoons of oil into a large skillet and start heating it over medium heat. Finish preparing the cutlets, then place them in the hot pan, not touching each other so far as is possible. Press the patties gently to ensure they are no thicker than 1″ anywhere.

Cook for about 7 to 10 minutes per side, until the potatoes are nicely browned and the patties are firm. If the potato coating browns too quickly – or does not brown quickly enough – adjust the heat accordingly.

Let the cutlets rest for 5 minutes before serving them.

Last year at this time I made Rutabaga & Mushroom Soup.

Share
Previous Carrot Cake – So Good, I Make It Every 10 Years
Next Berry Fruit Smoothie With Dates