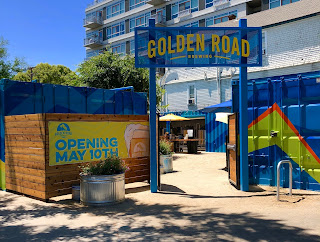 I had lunch a few days ago at Golden Road Brewing, which just opened in Midtown on May 10th. It’s been panned by local beer aficionados because it’s a corporate brewery owned by Budweiser in a city that prides itself on its many locally-brewed craft beers.
I wasn’t there for the beer, however. I was there for the vegan food, and there was lots of it! The food menu lists several items that are either vegan or can be made vegan, including three kinds of tacos (fried avocado, drunken zucchini, and papas bravas), three salads (Caesar, Mexican chopped salad, and summer green salad), and five other items (asada fries, chips and guacamole, street corn, avocado fries, and buffalo cauliflower).
I decided to make a lunch out of a couple of small plates — the avocado fries and the buffalo cauliflower. The avocado fries consisted of an avocado cut into fourths, dipped in beer batter, and fried. They were served with a chipotle sauce that was good, but pretty spicy. The buffalo cauliflower was also dipped in a beer batter before being fried, then served with a vegan dill ranch sauce. It was really, really good! 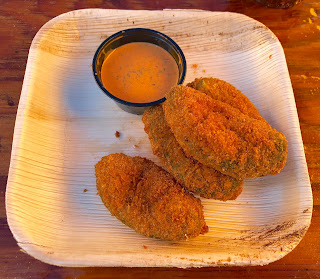 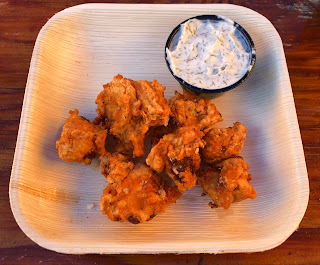 Golden Road even offers a dessert that can be veganized — the “Get up offa that brownie.” It’s a house-made beer brownie with chocolate sauce and a strawberry on top. Great way to top off my lunch! 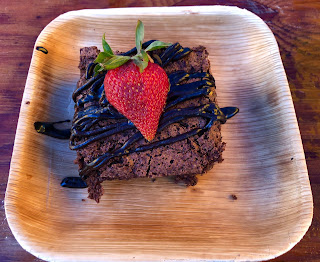 Golden Road Brewing is located at 1830 L Street, and their phone number is 916-382-9445. It’s one of four Golden Road locations throughout the state, so it doesn’t have a website or Facebook page of its own. However, the company’s website address is http://goldenroad.la/home, and their Facebook page can be found at https://www.facebook.com/goldenroadbrew/. The Sacramento location is open Sunday through Wednesday from 11:00 a.m. to midnight, and Thursday through Saturday from 11:00 a.m. to 2:00 a.m.
Share
Previous Fried Cheese Egg Toast – The Breakfast of Champions (In a Rut)
Next Mint & Barley Soup