Home » A Note from the Garden » Early Summer Garden Update

justin A Note from the Garden Leave a comment 109 Views 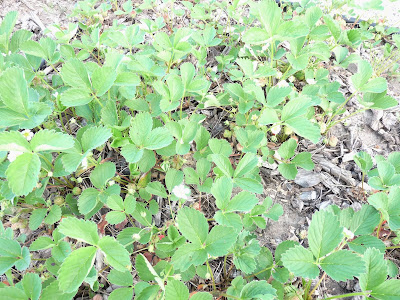 How dry I am! Well not me, personally, but the garden. We need some rain so desperately. As usual, I watch the radar map showing torrential downpours to the north-west and south-east; we get nothing. We are already watering on drought rations. Very bad at this stage in the proceedings.

Above are some strawberry plants in one of our established beds. They are blossoming profusely, but the berries are small and are coming out a little odd due to the lack of water. We have picked a few though, and hopefully many more to come. 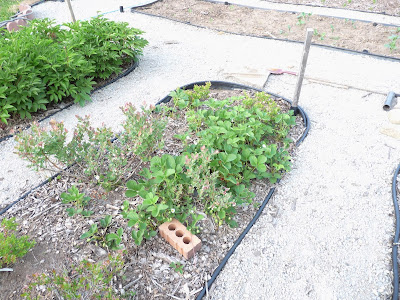 This is a strawberry plant that showed up as a seedling next to some blueberries. I recognized it as not a wild strawberry, so we have been letting it grow. Last year it sent out runners all over, but no berries. This year it is flowering and producing quite a few nice large strawberries. 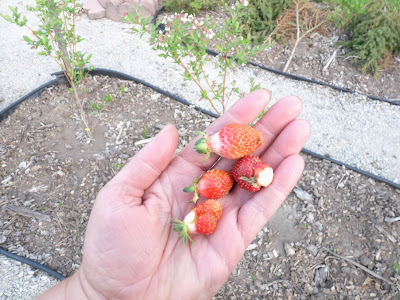 They are rather long and thin and oddly shaped, and not huge although I consider them a very decent size. They have no commercial potential in other words. However, they are very tasty and look quite productive so when the strawberries in the first photo are ripped out – which will happen after the fruit is done as it is time to renew that bed – they will be replaced at least in part with this plant. 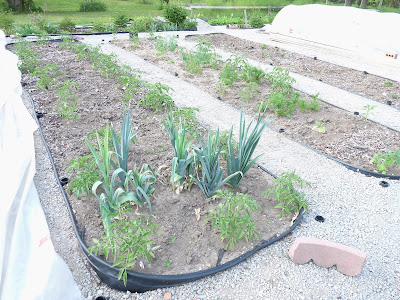 Tomatoes are in and doing well. They are easier to water than many things and also deep rooted from nearly the beginning so they are tolerating life quite well. We are getting flowers on them already though, which is by far the earliest I have ever seen flowers. Whether that translates to earlier tomatoes or not remains to be seen.

They were planted around some leeks from last year. These were the ones that came up from overwintered outdoor seed last year, much to my surprise. There were some very nice leeks that looked really good in the spring so of course we did not eat them, we are saving them for seed. It would be excellent to have a strain of leeks that are good for spring eating. 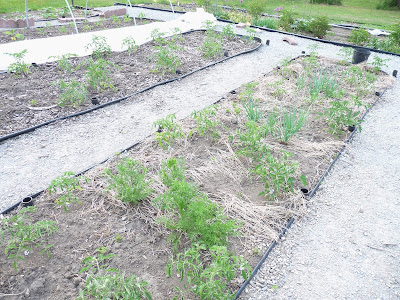 Another view of one of the tomato beds. It looks like it has a straw mulch, and it sort of does. This is where we grew Red Clover last summer. We are really pleased with it. It was quite weed suppressing, with the exception of a little wild clover which we obviously overlooked while weeding due to it looking too much like the Red Clover. No biggie, though – it pulls out easily now. Also the Red Clover died completely over the winter leaving a straw-like mulch and it does not appear to have self seeded. I think we will be cover cropping more beds with Red Clover in the future. 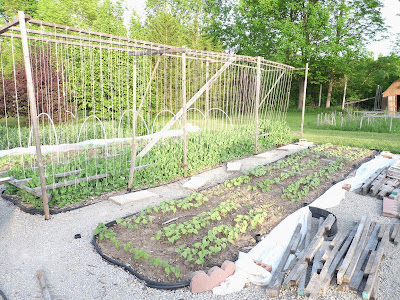 Mr. Ferdzy has one of the bean trellises up; 2 more to go along with all the tomato and melon trellises. So far most things are not growing quickly though, due to the lack of water. 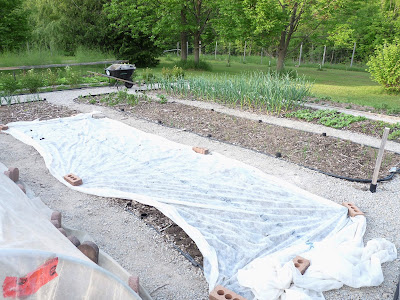 We are still trying to germinate carrots. I think it is time to do our usual re-seeding after the partial failure of the first seeding, after which both seedings will germinate and there will be far too many carrot seedlings. There does not seem to be any other way to do it, it does not seem to matter when we plant. Grr.

Garlic in the background looks pretty good. We were unsure how it would do, given how virus-ridden it all looked last year. A few of the Tibetan did not come up but otherwise it is enjoying this years hot dry weather much more than last years cold and wet. Next to it we have some radishes just about ready to pick. 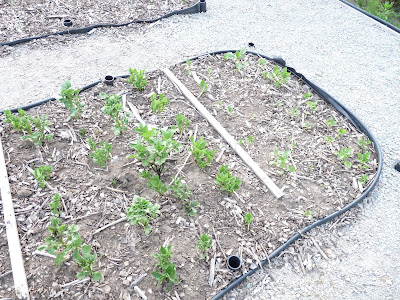 The larger plants here are selections of potatoes we have grown from seeds in the last year or two. The smaller ones on the right are from seeds planted this year, including from my really exciting (!!!) seedball from a Russet Burbank. Most of the rest are from some Latvian potatoes which I got at the potato breeding workshop we went to a while back. 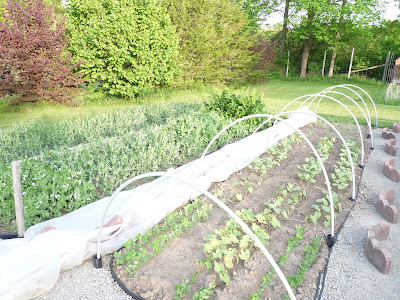 Shelling peas for freezing are flowering in the 2 far beds here. There is also a row of parsnips we have left to go to seed. In the front are some peas and beans I am growing out from crosses to see how they do. Behind them are Lima beans, which is why we are still prepared to cover the beds. There have been some cool nights and the Limas won’t be happy about that. 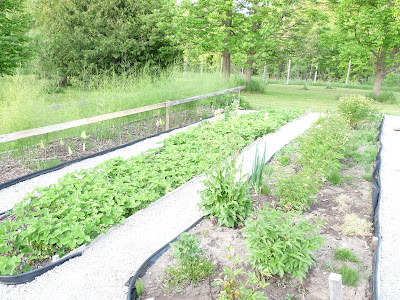 And finally, the side section is shaping up. The new asparagus is really settling and looking good – we should be able to start picking it next year, no problem. The strawberries here are in great shape and look like being quite productive this year. The old cutting-flower and herb bed that went so completely to pot over the last few years of parental upheavals needs a good weeding, but it is within the bounds of reason. The transplanted peonies are struggling a bit, between being transplanted, very dry, and having some kind of fungus problem. But there is always something. So far the drought and the peony fungus seem to be it. Plenty of time for other problems to shape up of course, but so far fairly manageable. Now all we need is for it to RAIN.