This popular Dutch dish was apparently invented in 1952, by a butcher who made them up and sold them ready-to-cook. The name translates literally to lettuce-finch, but is supposed to be a contraction of slager’s vink which is to say butcher’s finch. All clear?

The dish itself is simply a fairly basic elongated meatball, wrapped in bacon and pan-fried. You can then use the drippings to make a quick gravy, or not, as you like. I’m putting this as an all-year-round dish, as I think it would do very well cooked on the grill. We did them the traditional pan-fried way and scoffed them down. Extras were frozen, and will make a couple of quick meals later on. This amount is about double the traditional recipe, but now that households are smaller than they used to be, good luck finding ground meats sold in a package much smaller than 500 grams. You used to be able to. On the other hand the frozen extras really will be handy. 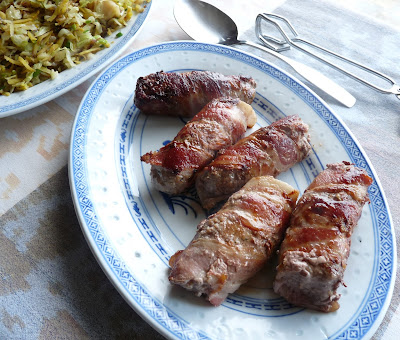 Grate or grind the bread crumbs finely and soak them in the broth in a large mixing bowl for 10 minutes or so. Use this time to peel and mince the garlic and shallots, and mince the parsley if you have it. Add these seasonings to the bowl.

Add the ground beef and pork, break in the egg, and add the rest of the seasonings. Using your (clean) hands, mix everything together until thoroughly blended. Divide the mixture into 4 equal portions, and divide each portion into 3 or 4 smaller equal portions.

Shape each portion into a small log, about an inch to an inch and a half in diameter, and wrap each one in the bacon, starting at one end and going in a spiral along the log. Repeat with the remaining portions and slices of bacon.

Wrap any Slavinken you don’t intend to cook right away in plastic wrap, individually or in pairs, and put them in a ziplock bag in the freezer, with as much air squeezed out as possible. Thaw overnight in the fridge before cooking (or move them there first thing in the morning for an evening meal.

Once they are thawed or for the ones you intend to eat at once, just proceed…

The ingredients above are in a proportion that assumes you are cooking 4 to 6 Slavinken. It is not necessary to make the pan gravy at all, in which case simply space them out in a hot skillet (over medium heat) and cook them for 3 or 4 minutes per side. Since they are logs, they don’t really have sides, but assume 4 sides so a total of 12 to 16 minutes cooking. Let them rest 5 minutes before serving. Leave them in the pan to rest if you are not making gravy, but remove them to a serving dish if you are.

To make the gravy, mix the flour and mustard into the beef broth. Keep the pan in which the Slavinken were cooked over the heat when they are removed, and pour in the mixture at once. Stir constantly, and scrape up any browned bits from the pan. As soon as it thickens – just a couple of minutes – transfer it to a gravy boat and pass it with the Slavinken.

Last year at this time I made Papas (Patatas) Bravas.

Share
Previous Sticky Garlic Pork Chops – What Do You Think, About Slightly Pink?
Next Quick and Easy Beer Chili