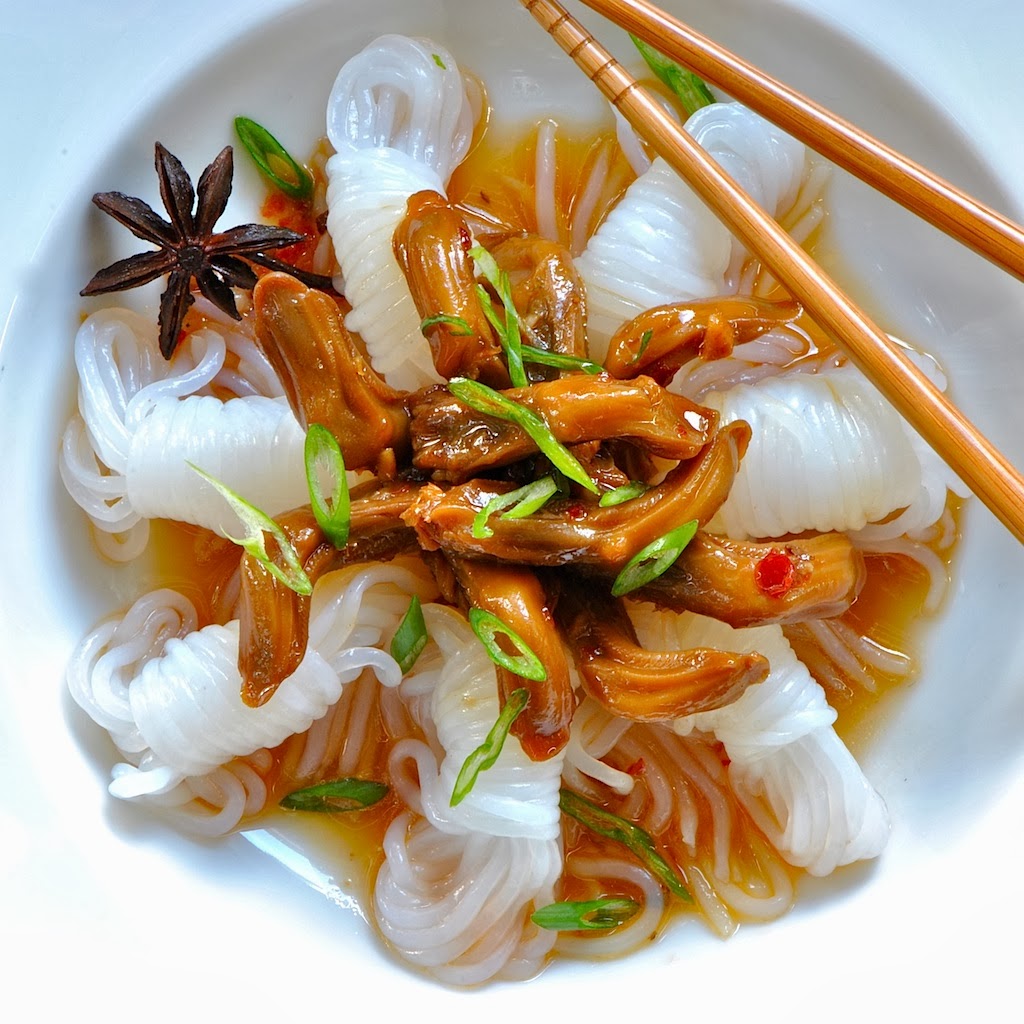 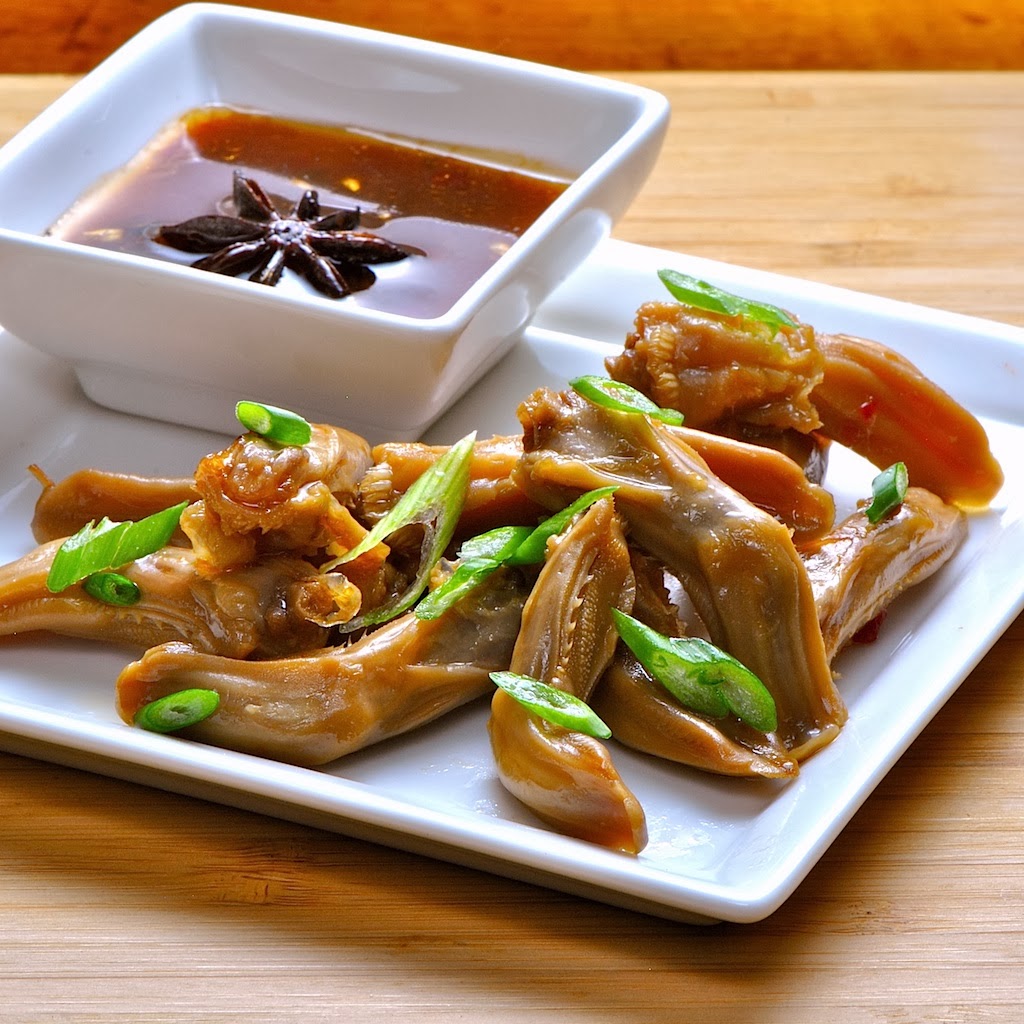 YES, ducks do have tongues
YES, people DO eat them and…
YES…i DID go there.

SUPER FUN STRANGE
yet quite delicious

now i see why these are considered a bar-snack or dim sum nibble in the Asian culture.  once you give in and try one you’ll find yourself with a pile of 20 or so bones that you’ve sucked clean.  aside from the “odd-bits” factor, they are quite unique and fun to eat.  i would say it’s most similar to a chicken tail or “the Pope’s Nose” as my colorful 108 year old Grandmother used to call it.
SO HERE WE GO….i cooked them two ways.  1/2 pound was slowly simmered in an Asian flavored duck stock and 1/2 was marinaded in sweet, spicy soy, ginger, star anise… then braised in the oven.  i think the slow simmer worked best for cooking, but the sauce from the braise was delicious for dipping.
next time i think i will combine the two somehow or maybe i’ll try Chichi’ Wang’s version over at “The Nasty bits”
NOTE…this is a very “Americanized” version of duck tongues.  i do not have a wok, a pantry full of fabulous Chinese ingredients or the proper skills to throw together an authentic Asian-style duck tongues recipe, so this is what i came up with…AND IT WORKED.  i will definitely be having these again SOON. 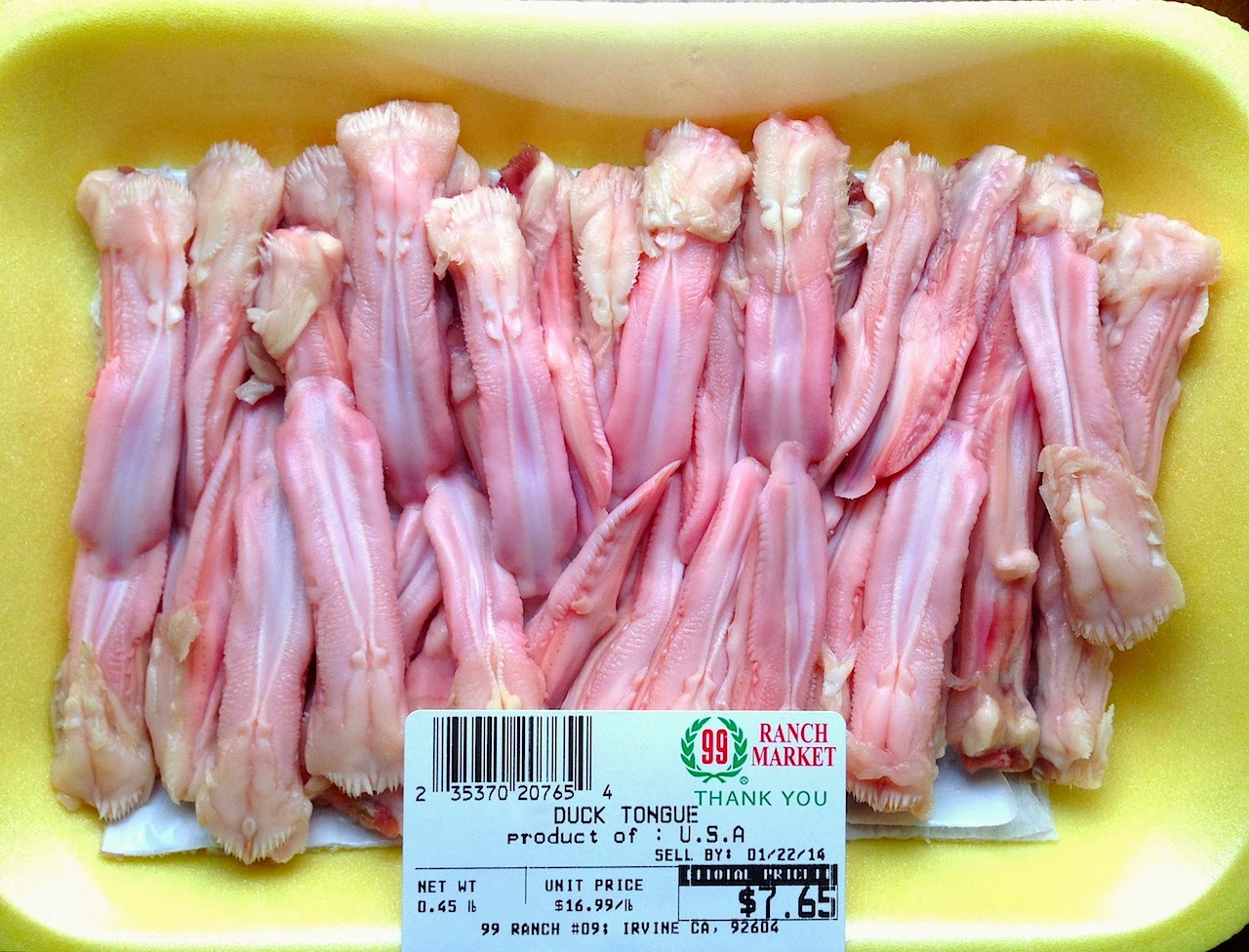 inflation has hit the duck tongues market.  i remember when i first saw these about 2-3 years ago.  i had no idea what to do with them so i never bought them…too bad.  had i known they were this much FUN i would have purchased a bundle.  i think they were about 5.00$ a pound…now they are 16.99$ a pound 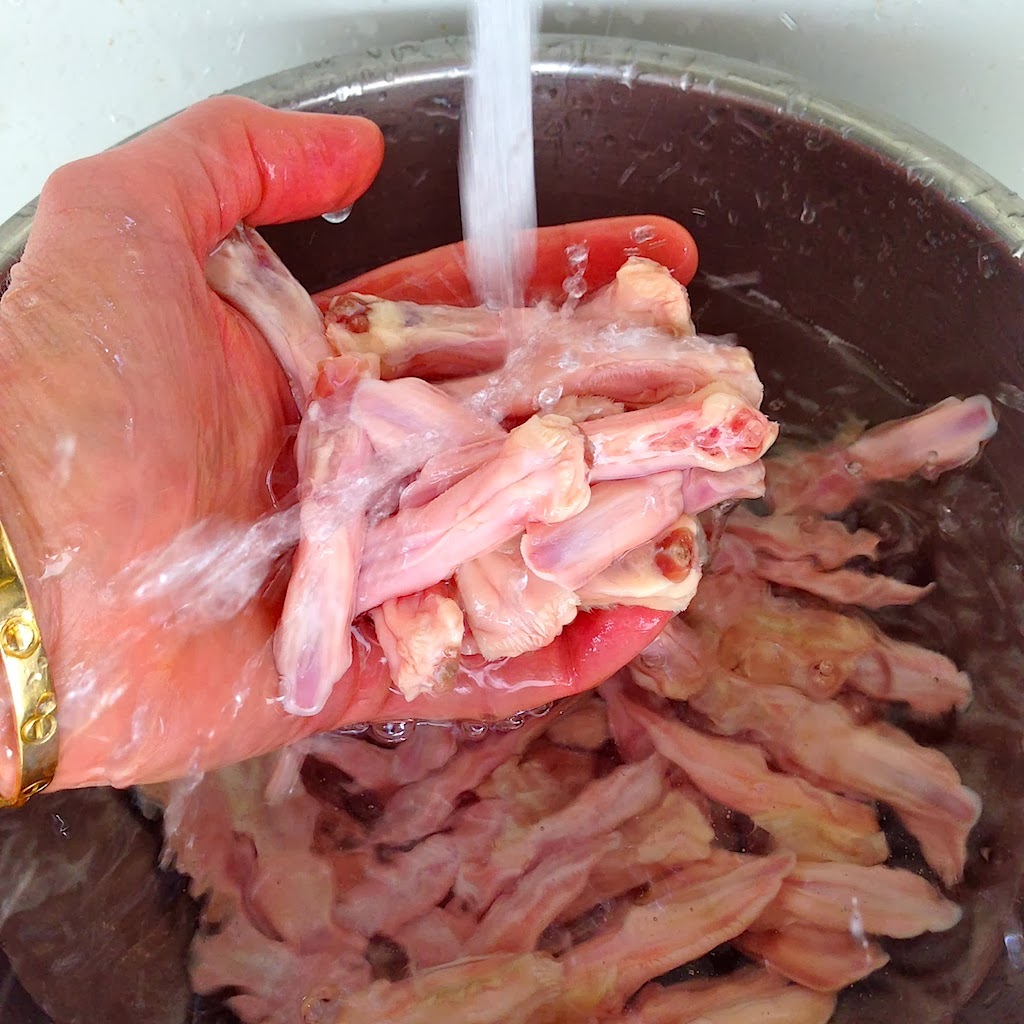 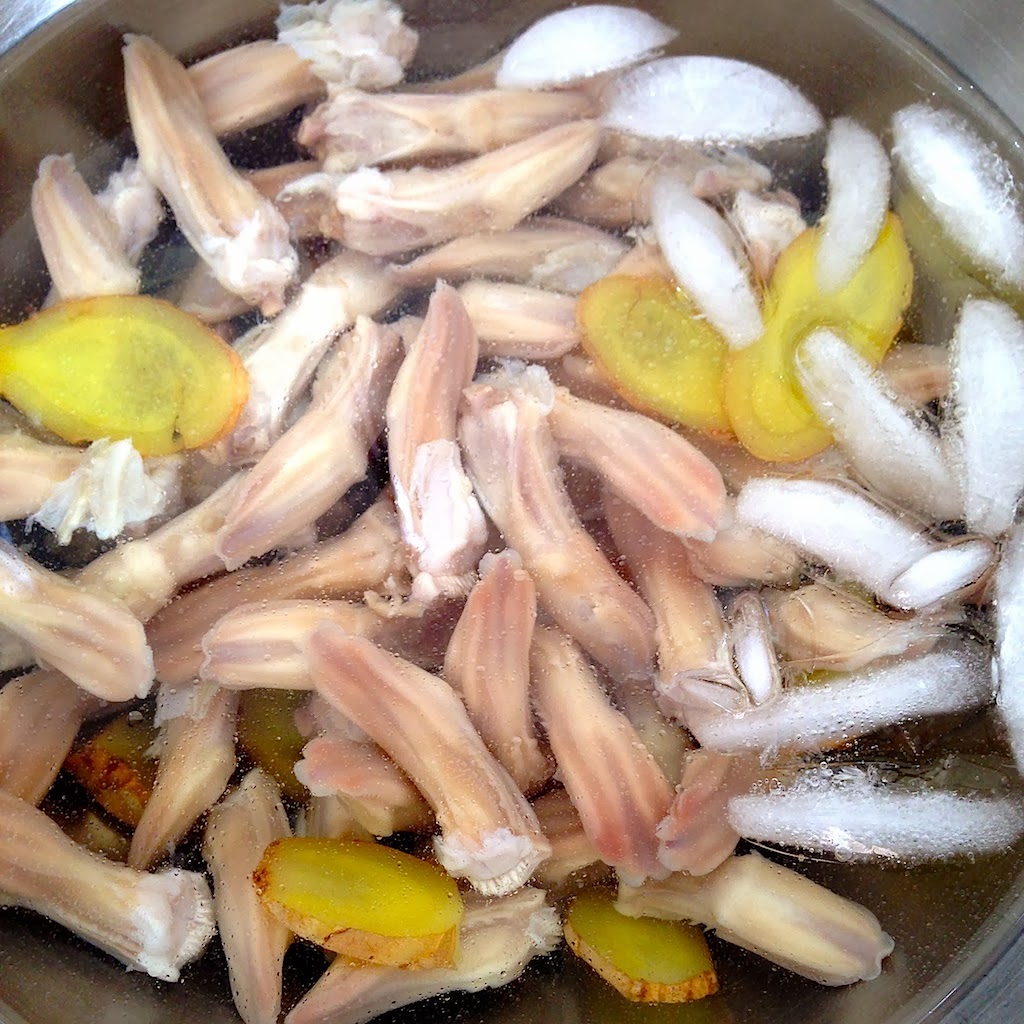 photo above is the cold water bath
2nd…you must do a short pre-boil
put about 7 thin slices of ginger in a pot of water, a good pinch of salt and enough water to totally cover the tongues.  bring the water to a boil and throw in the tongues.  let them boil for 2-3 minutes.  remove them, drain hot water and put them in a cold water bath to stop the cooking.
now you can cook them as you please.
I EXPERIMENTED 2 WAYS… 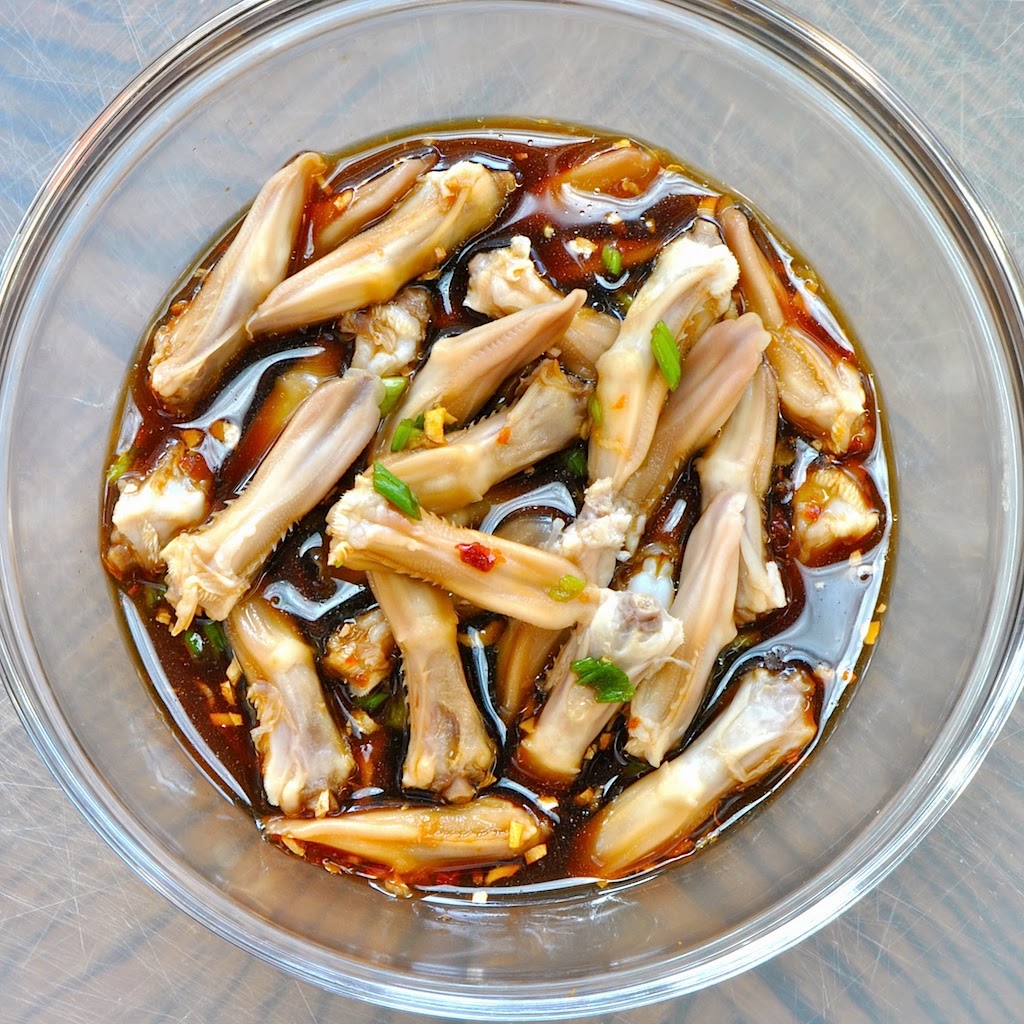 MARINADE then OVEN BRAISE
FOR THE MARINADE…
1/4 cup soy
1 large T minced ginger
2 star anise
3 T brown sugar
1/2 T sambal chili garlic sauce
splash of shauxing wine
1 small scallion sliced
put tongues in marinade for 30-40 minutes.
strain tongues from marinade and put in oven safe dish.  save the marinade, but it must be boiled if you intend to use it as a sauce. 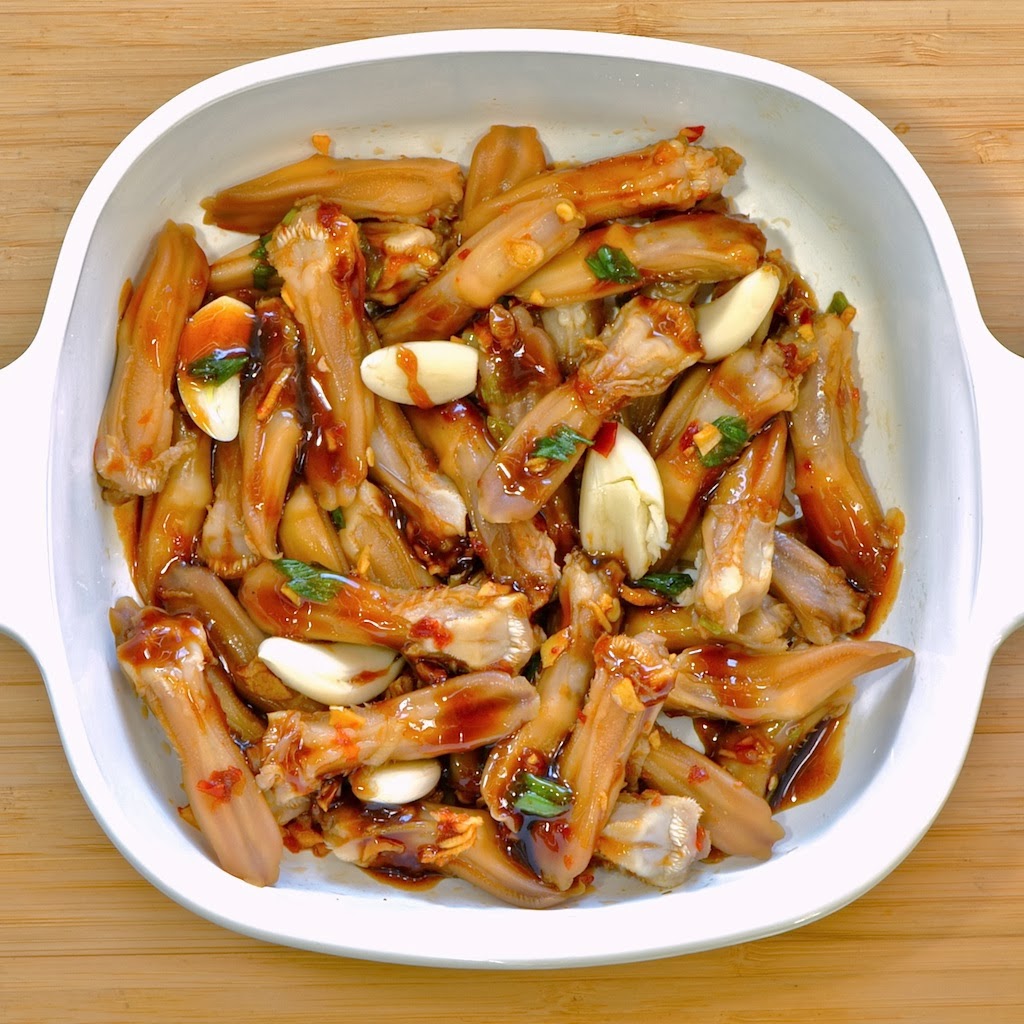 i poured some “Soy Vay” Hoisin Garlic Sauce over the tongues with a few crushed garlic cloves, a drizzle of sesame oil and added just a bit of stock so there was enough liquid to braise, but NOT boil.
(photo above is before adding the stock)
i had this in the oven, covered,  at 320 F for about 1/2 hour.  checked it at 1/2 hour.  they were still a bit chewy so i lowered to 300 F and continued for another 1/2 hour.
the end result was delicious, but i found that these tongues shrank just a bit…they were not as plump as the slow simmer batch. (example below) 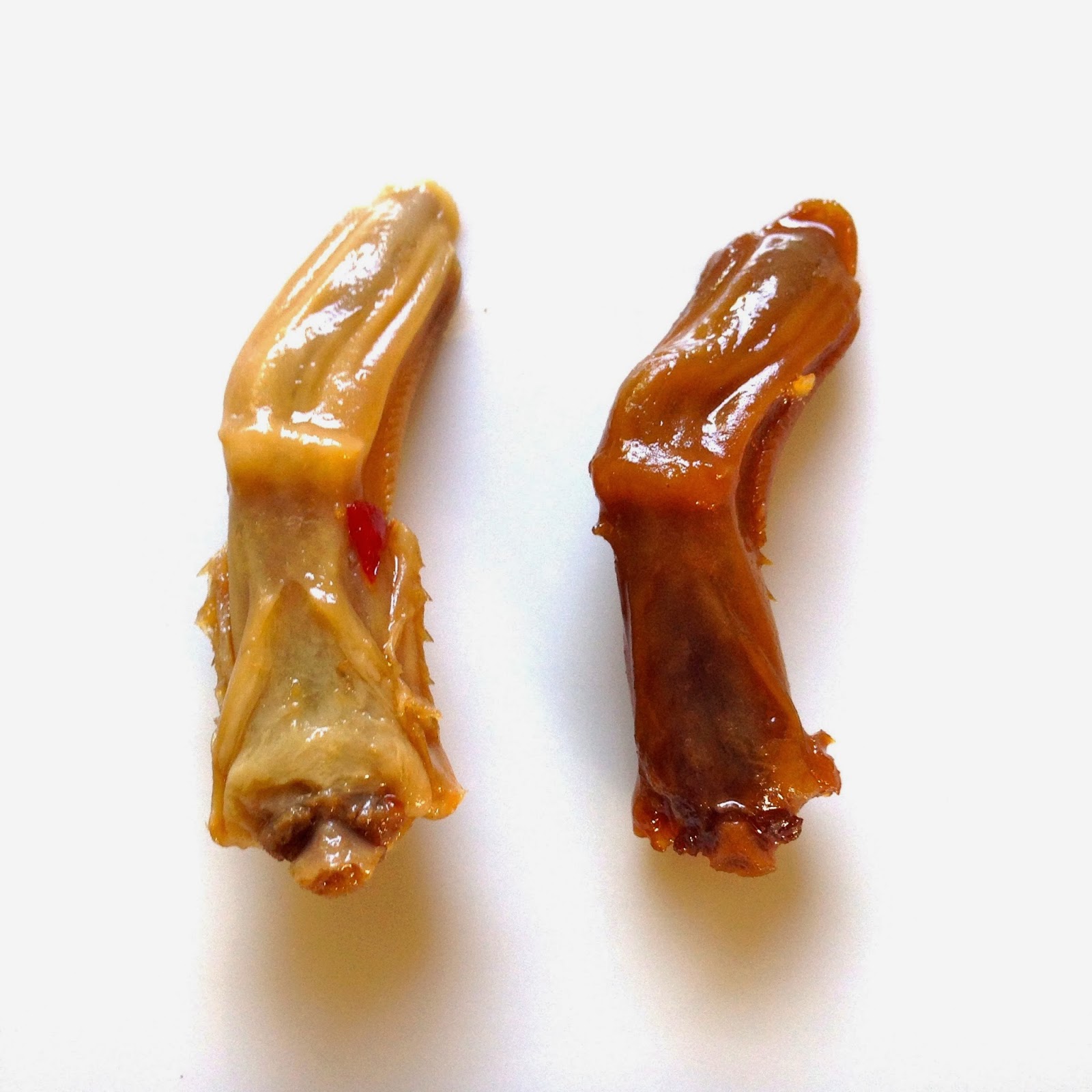 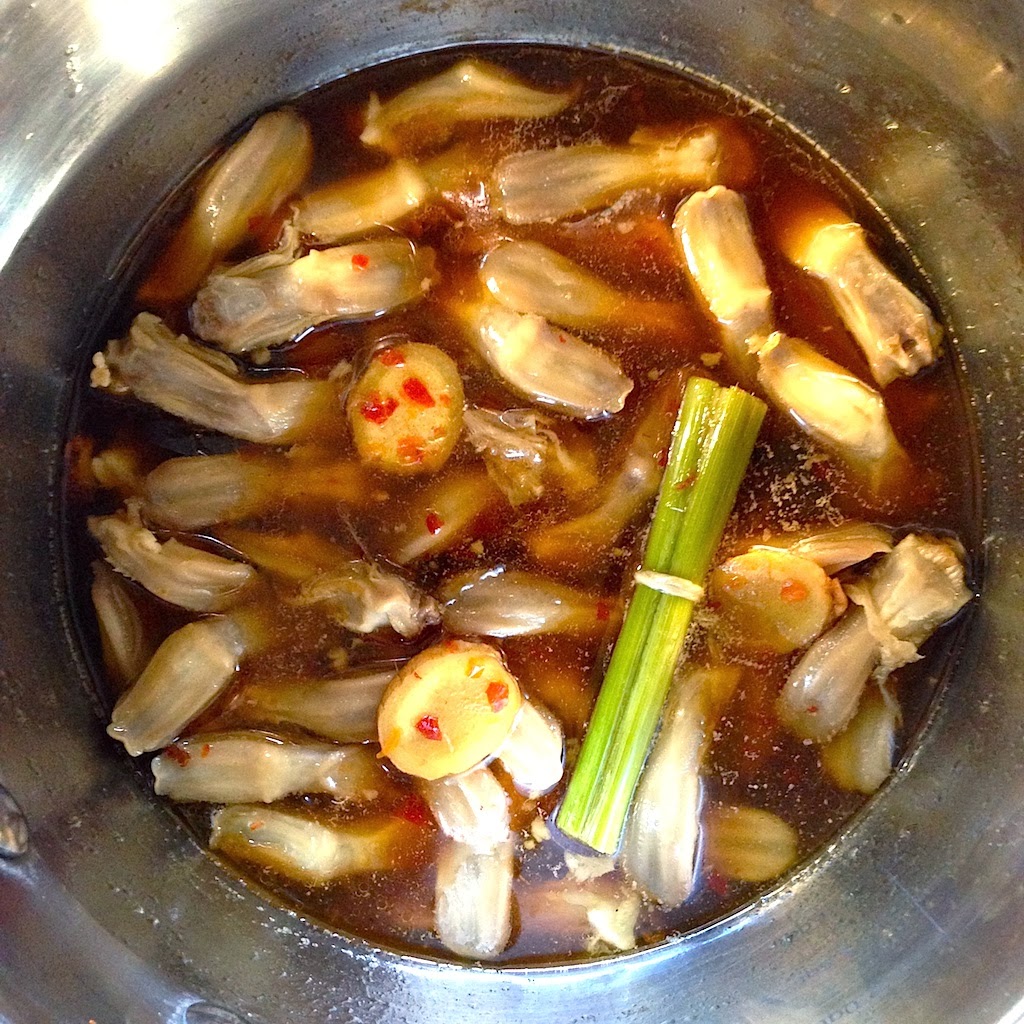 i was lucky enough to have some duck stock in my freezer.
find the recipe for Asian flavored duck stock HERE
i suppose you could use homemade chicken stock, but i wanted to get the full “duck” experience.
to the stock i added a couple of star anise, a few ginger pieces, a short stick of lemongrass (tied and slightly pounded), a little bit of garlic chili sauce and a chopped spring onion to the simmer.

bring to a boil and then to a very slow simmer.  check on them until they are done to your liking.  i wanted them fairly soft so they were in for about an hour. 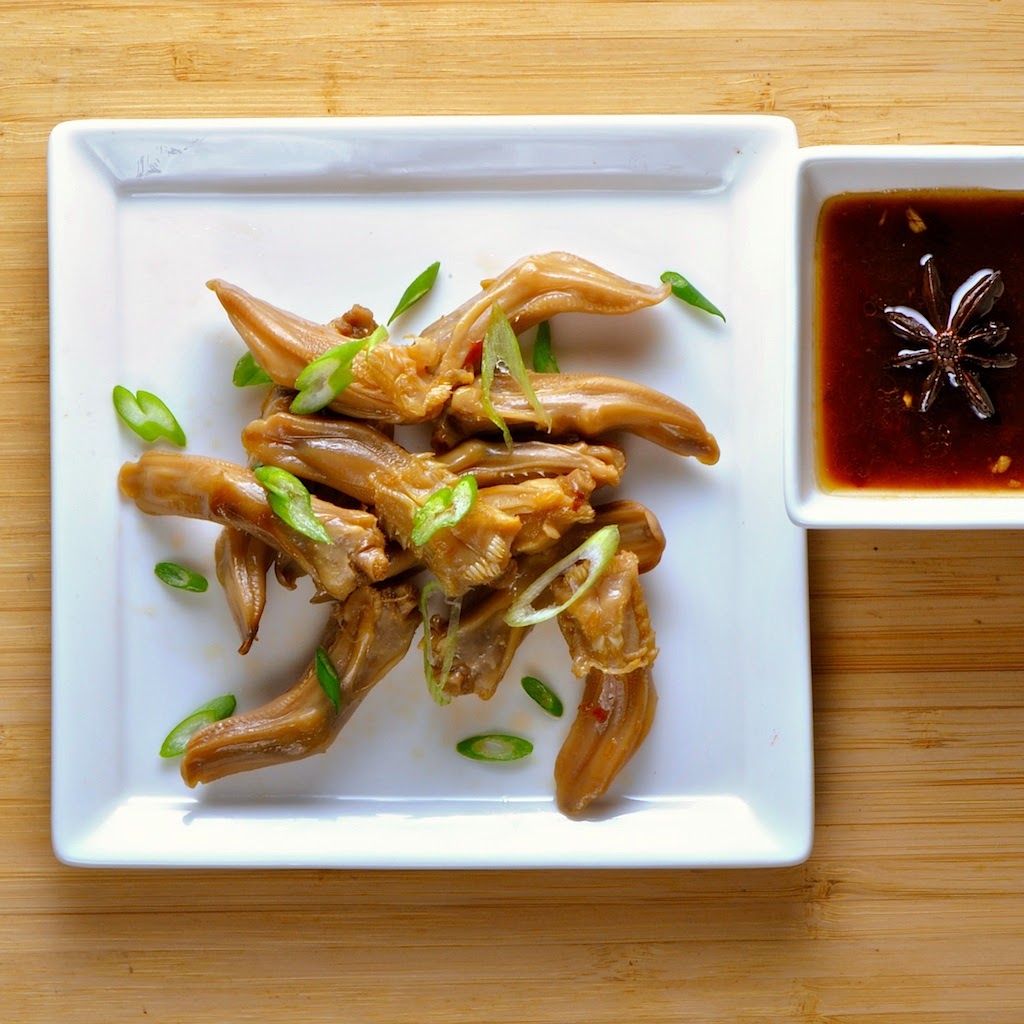 they are delicious straight out of the pot.  serve with or without sauce, over noodles or deep fry to make them crispy good.  mine never made it to the fryer, but i will try this next time. 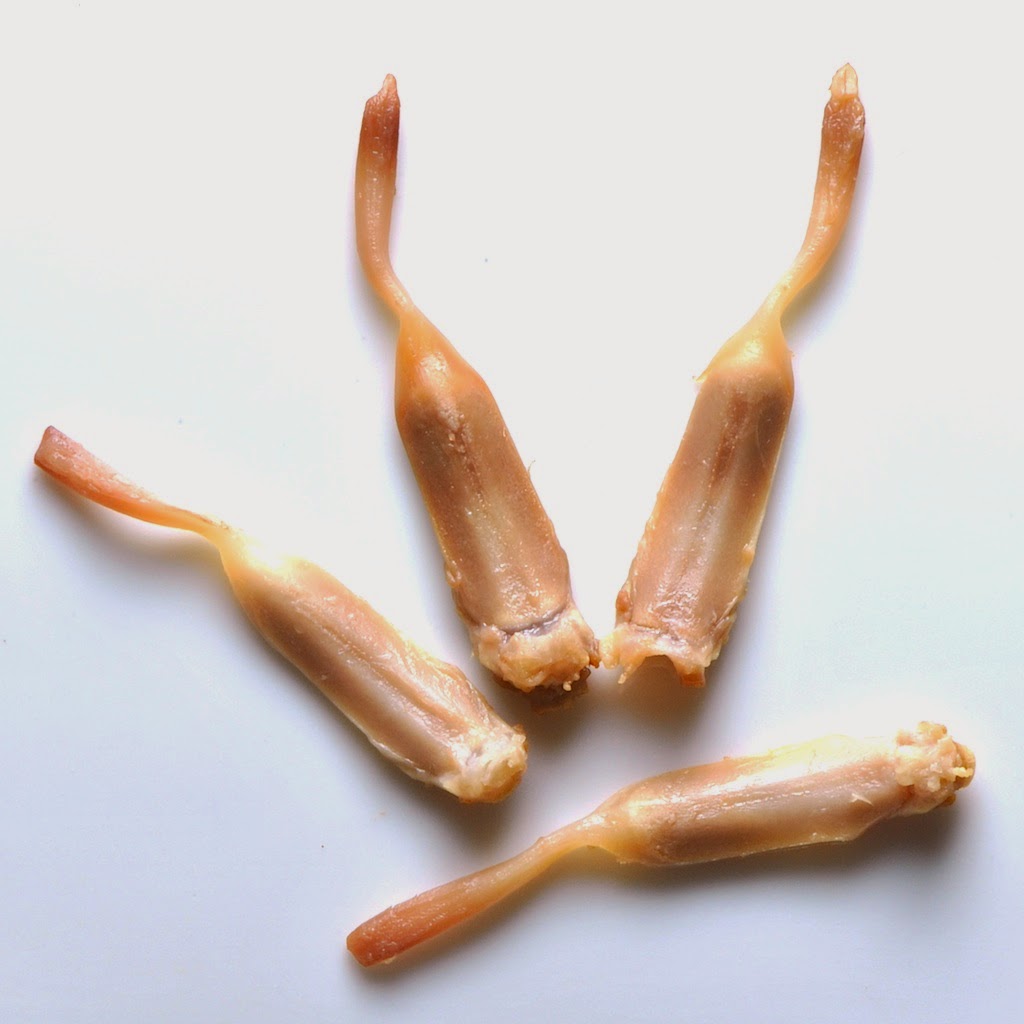 this is what you will find inside the duck tongue

the tip is flubbery and edible if cooked long enough, the flat part is hard cartilage and there is a pebble size bone at the very end. 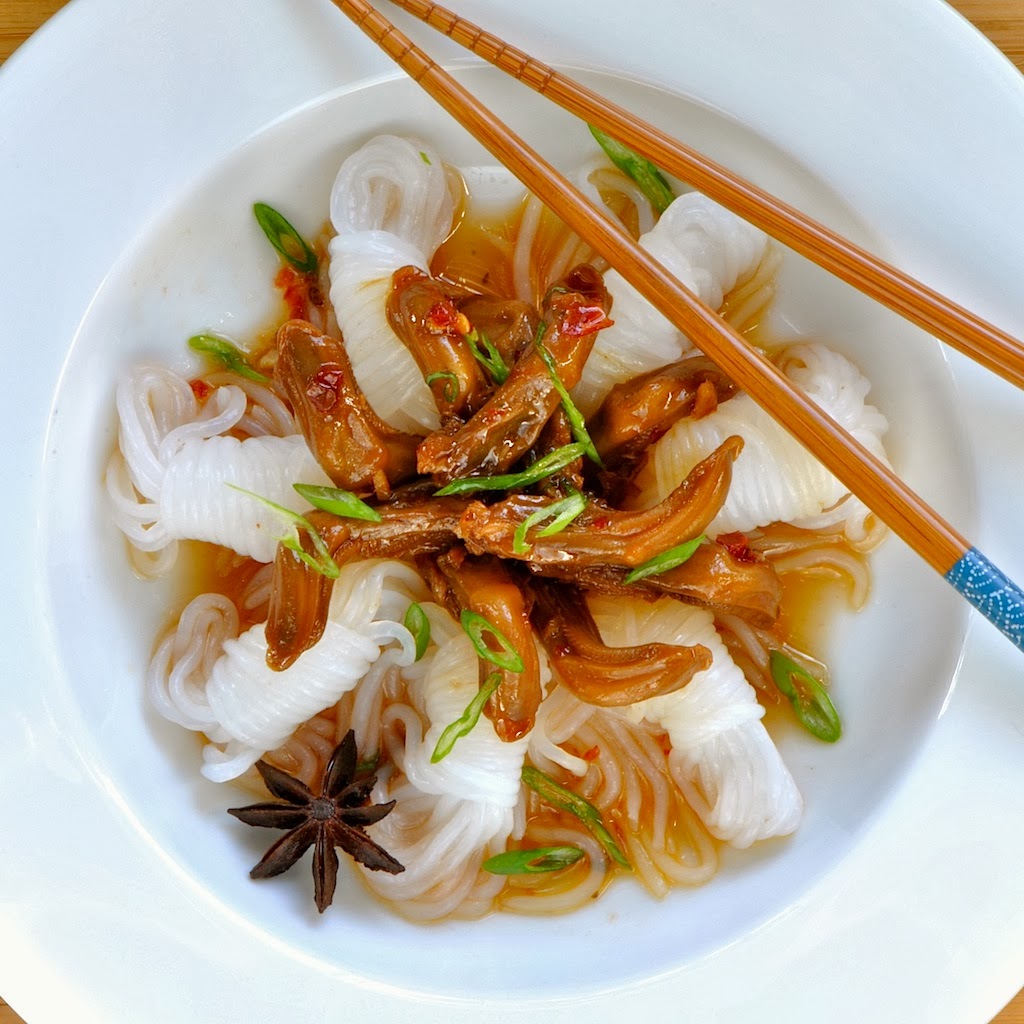 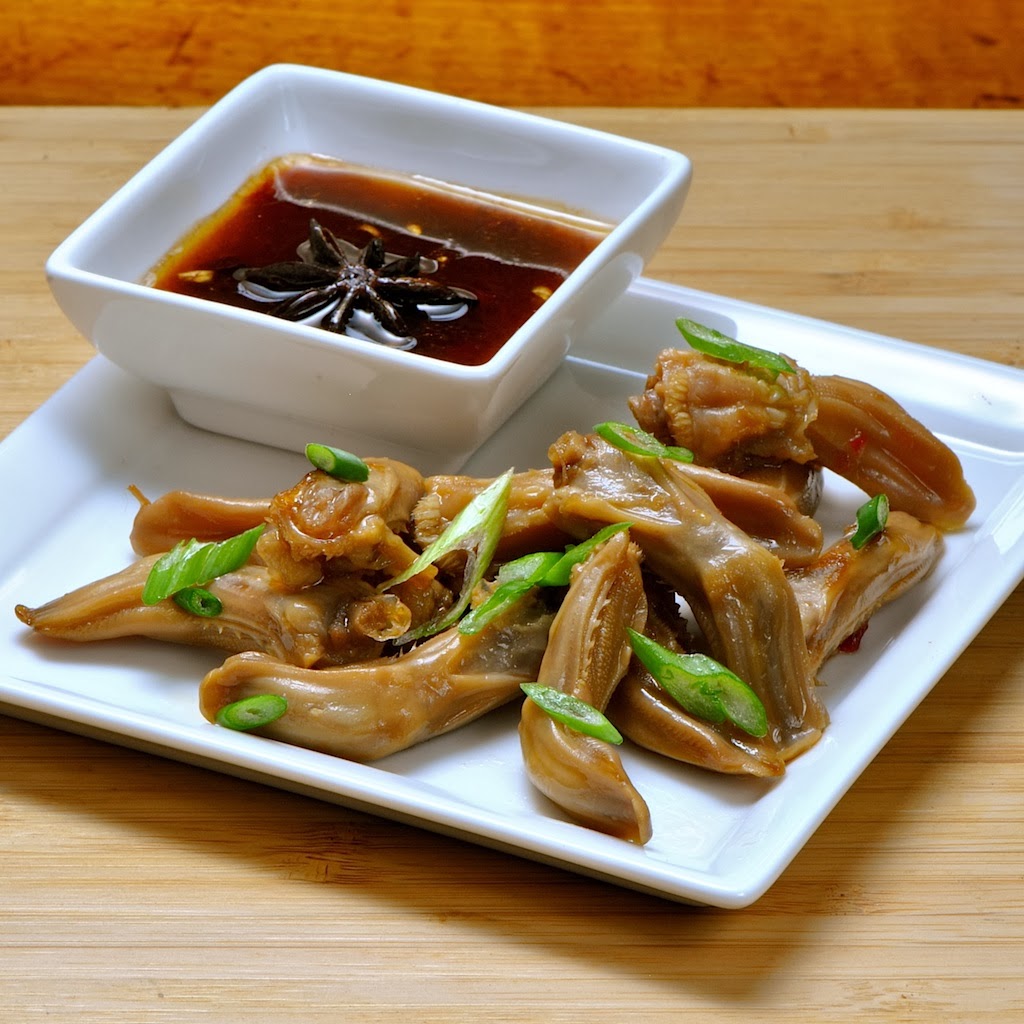