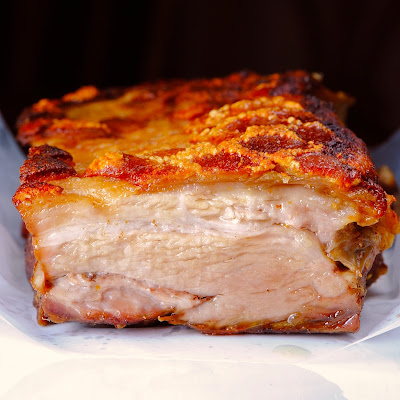 here you are…as promised …
the 3 to 4 hour PORK BELLY
if you’ve been following along you probably read about the delicious 3 DAY Pork Belly.  well, this one takes about 3-4 HOURS and it’s just as pork-belly-icious!.
i always say…
“you can’t go wrong with pork belly”.
this technique produces the ultimate crispy crunchy skin and…
juicy fat dripping tender pork belly. 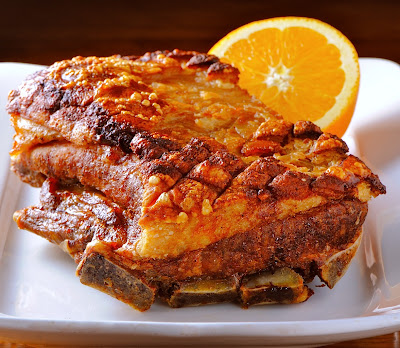 two things that i had never tried before… cooking a pork belly with the bone in and cooking skin side down for the first few hours.
for some reason it’s a little more expensive with the bone, but that’s only about $3.59 a pound.  more money = more delicious?…not a big difference, but the meat next to the bones and the ribs i ate immediately were fall-off-the-bone delicious.
after it was all finished, i removed the bones with a long sharp knife very close to the bones so that slicing the pork belly in serving portions would be much easier.  on Bill’s show he was able to slice each portion with bone still attached which made for a nice plate presentation.   his servings looked like unctuous pork chops with belly fat and skin attached, if that makes sense.
here is the link to the recipe from the pork belly show.
the Caramel Vinegar Glaze is delicious as well.  i did not finish the glaze until late night so it didn’t make the photo, but do try it.  i think it would go well with just about any pork dish…or chicken.
AND…as far as the skin side down results?… i’m pretty sure i will do it this way from now on…the skin was perfect !!!…extra crispy. 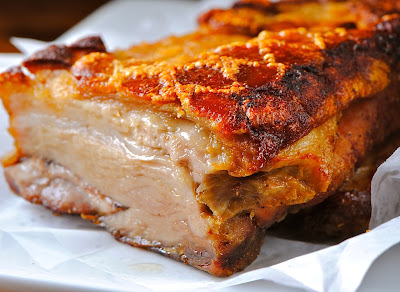 score the skin of the pork belly in criss-cross pattern as shown.  rub the salt into the skin and set aside for 30 minutes

wipe the salt off of the skin and dry well with a paper towel.  drizzle a large roasting pan with olive oil. as you can see, i lined the pan with tin foil for easier clean up…BAD IDEA.  the skin stuck in some areas where the oil did not meet the skin.  note to self…go for bare naked and deal with the clean up later, it’s not all that bad.  anyway…place the pork skin side down on the roasting dish and season the top with salt and pepper and a drizzle of olive oil.  put in the oven for 30 minutes to sear the skin.  then  reduce the heat to 375F degrees.  continue cooking for another 1 1/2 to 2 (mine was in for about 2 1/2 hours), or until fork tender.  now remove from oven and carefully flip over so it is skin side up.  roast for another 30 minutes or until skin is good and crispy.  you might choose to use the broiler for a moment watching carefully!
remove the pork belly from the oven and let rest for at least 15-20 minutes.

the roast is easiest to cut with the skin side down on the board.  my bones were going the length of the pork belly so i removed them close to the bone.  (NOTE…the meat next to the bone is the chef’s secret treasure bites). if your bones are going the width, you can slice a serving with bone attached for plating presentation and maximum enjoyment. 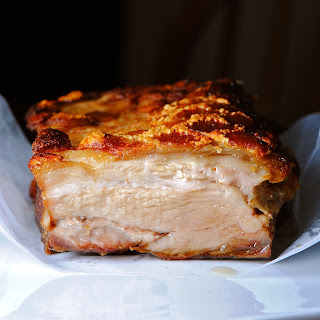 put the sugar, vinegar, star anise and cinnamon in a small sauce pan and cook, stirring over medium heat until the sugar has dissolved.  bring to a boil and simmer for about 5-10 minutes or until mixture is syrupy.  stir in chicken stock and simmer until slightly reduced.  add the orange juice and peel, reduce the hat to a low simmer until the mixture is thick and syrupy.  don’t forget to season with salt and pepper when just about done.
NOTE…this took longer than expected.  give yourself 30-45 minutes for a nice syrupy glaze. 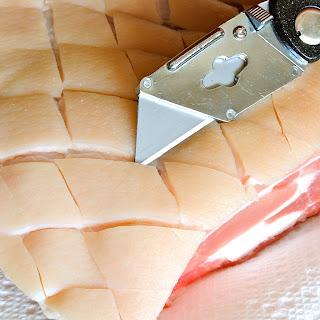 above is example of scoring.  my new favorite tool for the job is a razor sharp box cutter. 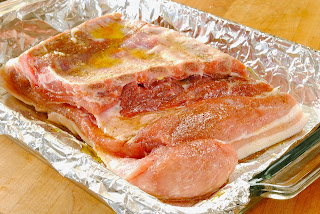 above is before oven using tinfoil…bad idea.  don’t use tinfoil… and below is after roasting with skin side down.  it should be fork tender at this point.  then it goes in skin side up for the final crisping of the skin. 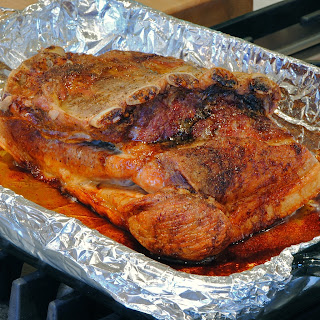 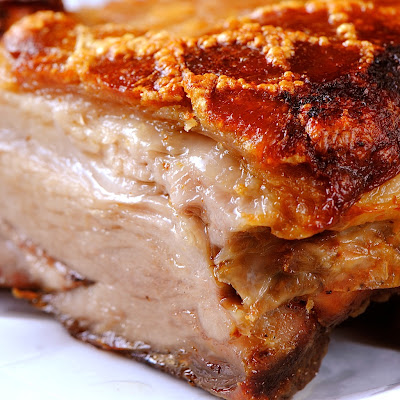 Share
Previous How do you take your tea? Russian Revels and their Tea Horse tea
Next Polish recipes: Kotlety Ziemniaczane ( potato cutlet/ pancakes)