There are few desserts to rival a cold, creamy cheesecake, but everyone has their own idea of what constitutes a Proper Cheesecake.  I like unbaked cheesecakes to be light and rather airy, but in a cooked cheesecake I want an unctuous, fairly dense filling, not too sweet, and a generous crumb base made of plain-tasting biscuits.  This is the ninth and final recipe in a series  for Woolworths South Africa, pantry sponsors of MasterChef South Africa.

My rich and luscious cheesecake, with its whimsical cinnamon stencilling, is unusual in that it has a baked filling and a thin sour-cream topping lightly set with gelatine.  You can, of course, make it without the sour cream topping, but this second layer adds an extra dimension of velvety deliciousness, and it’s essential to create a smooth white surface on which to apply the stencils.

I used laser-cut henna stencils to apply the cinnamon, which you can find in Asian markets, or order online. If you can’t find them, use an old-fashioned doily, or simply dust the cinnamon lightly over the top of the cake.

This is not a complicated recipe but – like all good food – it takes time and patience to make.  It’s very important to allow baked cheesecakes to chill very thoroughly, for at least 6 hours, so that the filling has a chance to settle and firm to just the right texture. Use a very thick, good-quality plain cream cheese – low fat is fine.

If you’d like to try stencilling other dishes, have a look at my Henna-Patterned Spiced Cream Cheese.

My other MasterChef SA recipes for Woolworths #wooliespantry:

Heat the oven to 170 ºC, or 160 ºC if you have a fan-assisted oven. Break up the biscuits and whizz them to fine crumbs in a food processor.  Stir in the melted butter. Press half the crumbs evenly over the base of a non-stick 24-cm springform cake tin. 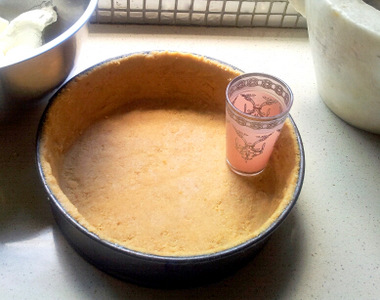 Press the remaining crumbs over the inner sides of the tin, gently easing them upwards. Use the side of a small glass gently to flatten the biscuit base, rolling it around in a circle, then stand the glass upright and roll it around the edges of the tin to form a smooth, even wall. Press a fingertip into the right angle formed where the sides meet the base to thin out this corner.  Refrigerate the crust while you make the filling.

Put the cream cheese and caster sugar into a large bowl and, using a rotary beater, whisk until just smooth and combined. Beat in the eggs one by one, then whisk in the vanilla, cinnamon and sifted cornflour. Take care not to over-beat the mixture. If you’re a confident maker of cheesecake, you can add all these ingredients to the bowl in one go, (see picture below) and gradually incorporate them into the mixture. 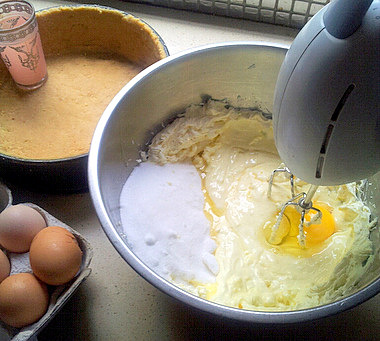 Pour the filling into the crumb crust. Bake, preferably in a bain-marie (see Cook’s Notes) for an hour to an hour and a quarter (this will depend on the efficiency of your oven. It is done when it is slightly risen, pulling away at the edges, lightly freckled with gold, and wobbles reluctantly when you give it a shake). Turn off the oven, open the door, and let the cheesecake cool completely in the oven.  Refrigerate for at least two hours.

To make the topping, put the water in a little heat-proof bowl and sprinkle the gelatine over it. Set aside for a minute to sponge. Place the bowl in a pot of simmering water (the water should come half-way up the sides) and stir occasionally as the gelatine melts. When the liquid is clear, remove the bowl from the water and set aside to cool slightly. Whisk the sour cream, caster sugar and vanilla together and stir in the melted gelatine. Pour the mixture over the top of the chilled cheesecake and smooth the top.  Cover and refrigerate for at least 4 hours.