Home » bacon » Chicken with Bacon, Leeks and Cider, & how I met Gordon Ramsay, and found him polite

Chicken with Bacon, Leeks and Cider, & how I met Gordon Ramsay, and found him polite

This is the one of the recipes I demonstrated at the Good Food and Wine Show last week.  I was pleased to receive an invitation to cook at the show, but gnawed my nails to the quick when I learned, rather late in the day, that 24 people from the audience would be cooking along with me in the Woolworths Real Food Theatre.  The dishes I’d chosen to demonstrate were too fiddly for a cook-along, so I abandoned them and instead selected three favourite recipes I knew could easily be done and dusted in 45 minutes.

As the main attraction, I settled on this easy crowd-pleaser, a recipe I developed for my cookbook Scrumptious: Food For Family and Friends.

Before give you the recipe, I must tell you how star-struck I felt to meet Gordon Ramsay at the show, after watching his hugely entertaining demo, to which I was invited (by his sponsor, Checkers) as part of a media contingent.

I mention this because I complained bitterly on this blog three years ago when the ‘VIP’ ticket my husband bought me as a birthday present turned out to be a proper turkey.  It wasn’t a good experience, and left such a sour taste that for several years I couldn’t face going back.

So when I finally met the man, after a short wait in an over-excited book-signing queue, I was determined to get in my ten cents’ worth. While he signed my copy of his new book Gordon Ramsay’s Ultimate Cookery Course, I told him I was a food blogger, and his famous furrowed brow creased like an accordion. But I followed that up smartly by telling him I’d recently had my first cookbook published, and was thunderstruck when he leaned forward across the counter to grasp my hand in both of his, warmly congratulating me, as if I had recently won a Nobel Prize. Seizing the opportunity, I slapped a dog-eared copy of his autobiography Humble Pie on the counter and asked him if he’d be so kind as to write a message to my sons across the cover.  “Neither of my teenage sons was interested in cooking until they read this,” I told him. “But now they are very interested. Can you please write something rude on the cover for them?”

He looked pleased, and asked, “What do you want me to write?”

“You f..king donkeys!” I replied, knowing my sons would be genuinely thrilled to be called such a thing (a famous line from certain Ramsay reality shows). 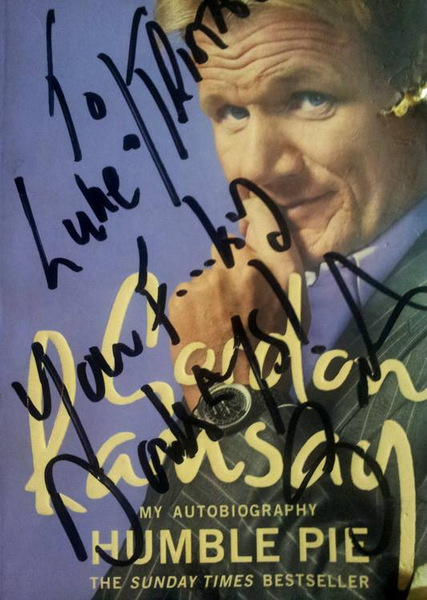 “I can’t write that!” he said, clearly appalled by my suggestion. “Not for teenagers, I can’t!”

With a bashful look – I can’t think of any other word to describe his expression –  he scrawled a message across the book cover, but he censored his beloved F-word with an ellipsis.

Anyway, moving on to my recipe. I love this luxurious coq-au-vin-style dish and make it quite often for friends when I’m looking for a comforting recipe with a complex flavour, but don’t have time to fiddle around with a lot of chopping or stock-boiling or slow cooking. You can made this dish in half the time by chucking everything together in a pan and hoping for the best, but I’ve designed the recipe so that it creates its own deep-flavoured stock and sauce as it cooks, drawing wonderful earthy flavours from the bacon, mushrooms, leeks and chicken.

Any dry cider will do for this recipe, but you will get a superior result from a carefully brewed craft cider. I’ve used, on various occasions, two excellent South African ciders –  Everson’s and Terre Madre – and was interested to note the subtle differences in the final result.

There is not a speck of flour in this recipe, yet the sauce reduces quite quickly to just the right state of silken thickness. You can’t achieve this in a small, crowded pot, however, because there isn’t enough surface area for the sauce to reduce in a hurry.  Make it in a large, shallow pan, such as an electric frying pan, or a paella pan if you have one.

If you can find fresh tarragon, use it by all means, but I find that good quality dried tarragon is just as pungent.  You can find good-quality freeze-dried tarragon at Woolies and in better supermarkets.

If you don’t use alcohol in your cooking, use a not-too-sweet apple juice (such as Appletiser) instead of cider.

Chicken with Bacon, Leeks and Cider

Remove any visible fat from the chickens and cut them into 16 portions (or ask your butcher to do this for you). Cut a lengthways slice halfway through the leeks and rinse, fanning out the leaves, under cold water. Finely slice the leeks (you’ll use the white and pale green parts only). Heat the butter and olive oil in a very large, shallow pan, add the leeks and bacon and fry over a medium heat for 4-5 minutes, without allowing the leeks to brown. Add the garlic and fry gently for another minute. Remove the leeks, bacon and garlic using a slotted spoon and set aside on a plate. Be sure to remove every trace of leek and garlic, as these will blacken during the next step and make the sauce bitter.

Scatter with parsley and serve hot with mashed or crushed potatoes and a green salad or vegetables.