I’ve recently reworked this recipe for a guest blogpost I wrote for The World of Beer blog. This is one of my all-time favourite recipes, and I do hope you give it a try. 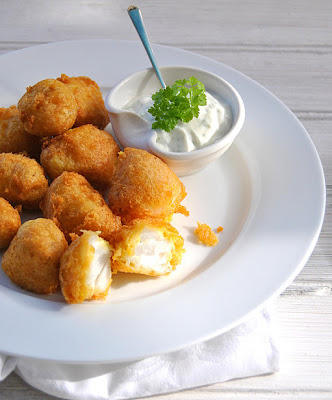 I often use beer to make batter for fritters and other deep-fried delectables because it produces such a beautifully light and brittle result. The actual science behind the beer-effect has always been a mystery to me, but recently I came across an article in Scientific American that neatly explains just why beer makes such excellent batters. In Beer Batter is Better, W. Wayt Gibbs and Nathan Myhrvold write: “Beer makes such a great base for batter because it simultaneously adds three ingredients—carbon dioxide, foaming agents and alcohol—each of which brings to bear different aspects of physics and chemistry to make the crust light and crisp.”

One of the most important points they make in the article is that because alcohol evaporates so fast, a batter made with beer needs less cooking time and dries out more quickly than one made with water or milk.

When it comes to frying delicate fish in batter, this speedy cooking time plus the insulating effects of the foamy batter both play a crucial role in preventing the fish from drying out in the fierce heat of the oil. It took me many attempts to come up with the right formula for a super-crisp fish batter, and eventually I abandoned wheat flour and cornflour altogether. In this recipe, I’ve used a mixture of chickpea flour and rice flour to give the spiced batter a fine texture and a lovely, lacy crispness. As the nuggets hit the hot oil, the batter puffs up into a crunchy golden cage, while the encased cubes of fresh linefish are quickly cooked by the action of steam.

I have called these nuggets ‘Cape-style’ because the fish comes from my local harbour in Hout Bay, and because the batter contains some of the key spices and flavourings of Cape Malay cuisine.

Served with a cool avocado and coriander dip, or a zingy yoghurt raita, or a fresh mint chutney, this is a delicious snack for a festive occasion, and I promise your guests will fall on the nuggets like starving puppies. Do use very fresh, firm-fleshed fish, from which you have removed all the bones, and not frozen fish, which will turn to mush.

I find it easiest to deep-fry food in a small, deep saucepan over a gas flame. You can use a pan over an electric plate, or a domestic deep-fat fryer, but a naked flame is better because it allows you to regulate the heat with ease. For perfect results, I can recommend using a thermometer to keep the oil at a constant temperature of between 160°C and 170°C. If you don’t have such a gadget, use Jamie Oliver’s method: put a little piece of raw potato in the oil while it’s still cold. When the potato floats to the surface and is a rich golden brown, the oil is hot enough.

Rice flour and chickpea (channa or gram) flour are both available from health shops, Indian spice shops and some supermarkets. 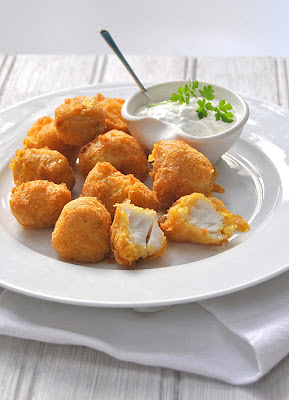 To serve:
lemon wedges
flaky sea salt
a dip of your choice

First make the batter. Sift the rice flour and chickpea flour into a mixing bowl and add the spices, salt and pepper. Gently pour the beer over the dry ingredients and whisk lightly until you have a smooth, slightly puffy batter about the thickness of cream.  Don’t over-mix the batter. Place in the fridge for 10 minutes.

Cut the fish into 2-cm square cubes. Put the cubes in a bowl and add the garlic, ginger and lemon juice. Season with salt and pepper and toss well to combine. Set aside for five minutes.

Warm a platter in the oven. Heat the oil in a small, deep saucepan, until it reaches 160°C. Put a little rice flour on a plate. Roll each fish cube in rice flour, dust well to remove the excess and, using a fork or a pair of tongs, dip the fish into the batter so that it is well coated. Gently lower the nuggets into the oil (five at a time is about right) and cook for a minute and a half to two minutes, or until puffy, crisp and golden. Fish the nuggets out of the oil in the order in which you put them in, using a slotted spoon, and drain well on kitchen paper. Place them in the warm oven while you fry the rest.

Serve piping hot with lemon wedges and a dip.

This article originally appeared at www.scrumptious.co.za on 5 January 2010, and then in The World of Beer’s blog on 20 June 2012.
Share