My husband Phil and I joined millions of people around the world on Saturday for the March for Science. The Sacramento march took us from Southside Park to the State Capitol, at which time I discovered that I had worked up quite an appetite. So we went and checked out Café Connection Caribbean Cuisine on L Street, across the street from the Capitol.

I was happy to see several items on the menu that appeared to be vegan or easily capable of being made vegan. Both the chickpea salad and the curry veggie salad looked as though they were probably vegan without having to make any alterations, and the only thing that would likely need to be changed in the chickpea wrap was to omit the ranch dressing. Since the restaurant was packed with other marchers, I didn’t want to take the time to ask a lot of questions, so I ordered the one thing on the menu that was actually listed as vegan — the vegetable curry plate. It turned out to be a very tasty dish, consisting of carrots, green beans, chickpeas, and peas in a spicy curry sauce, served over a bed of brown rice and beans. A side of mixed greens was served as well. 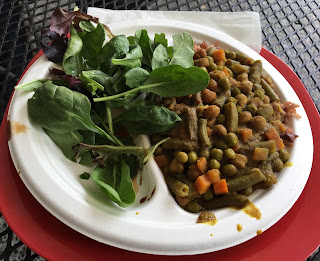 Café Connection Caribbean Cuisine is located at 1007 L Street, and their phone number is 916-447-8855. Their website address is http://www.cafeconnectionsacramento.com/, and their Facebook page can be found at https://www.facebook.com/cafeconnectioncaribbeancuisine/. According to their website, they’re open Monday through Friday from 7:00 a.m. to 4:00 p.m. The website also says the restaurant is closed on Saturday and Sunday, but they were definitely open this past Saturday. I’ll try to check with them within the next day or two to find out what their Saturday hours are, and I’ll post the update here.
UPDATE: I called the restaurant, and they said their hours are Monday through Friday from 8:00 a.m. to 5:00 p.m., and Saturday from 11:00 a.m. to 4:00 p.m. 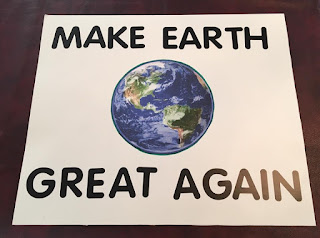