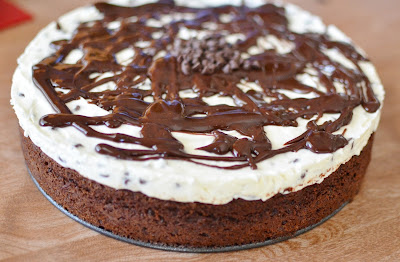 The best thing about this cheesecake is that it’s a no-bake cheesecake. Well, I guess you have to bake the brownies. But COME ON! Look at this! It’s divine, delicious and indulgent. It’s also pretty fancy, but doesn’t require any skill…my kind of fancy. No brainer folks. You HAVE to make this! 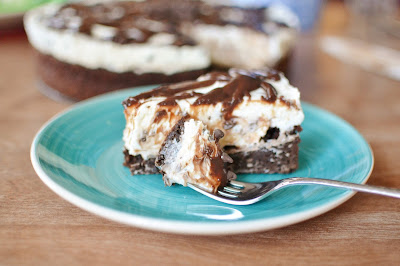 For the Brownie Bottom:
* I usually just make my homemade brownie recipe and don’t put all of it in, baking the rest in a small pan along side the actual dish. This also gives the kids a little something to snack on:) If you don’t want to use a homemade brownie recipe, you can buy an 8×8 size box brownie according to the package and bake it in a 9in. springform cheesecake pan. Before you put the brownies in the oven, make sure you wrap the outside of the pan with tin foil so there isn’t any issue with it dripping.

Stir in a little less than 1 cup of mini chocolate chips. Pour a little more than half into a greased springform pan. Pour the rest into another small, greased dish. Bake about 25 minutes at 350 degrees until the sides pull away from the pan or a toothpick inserted comes out clean. Your baking times may vary depending on your oven or baking dishes. Cool brownie base completely.

Beat cream cheese in a mixer with sugar and vanilla until blended and very smooth.  Using a separate electric mixer with a whisk attachment, beat the heavy cream with the powdered sugar until soft peaks form. Fold the whipped cream into the cream cheese mixture. Gently stir in the chocolate chips. Transfer the filling to the cooled brownie crust and spread it evenly.  Top with ganache.

Warm the cream in a small saucepan over medium heat. Once it boils, pour it over chocolate chips and let it sit for about 1 minute, then stir until chocolate is incorporated into the cream. Drizzle over cheesecake. Refrigerate for at least 4 hours or overnight. Pop open the springform pan, releasing it from the bottom. Enjoy!!