Our apples, as usual, are few and rather awful, but we managed to scrounge enough to make a batch of this mincemeat. Other than apples or pears, I’m afraid this is pretty determinedly non-local, but about every 5 years or so I hear the call of the mincemeat anyway. It’s quite rich and there are all kinds of other Christmas goodies I like just as well if not better, but this year the urge struck so here it is.

In spite of the number of ingredients it’s actually pretty quick and straightforward, as far as canning projects go. Apples will give a firmer, tarter mincemeat, and pears will make it softer and sweeter. I have also given up all pretense of putting any “meat” (or suet, etc) into my mincemeat, so this is vegetarian.

Part of the reason I decided to make mincemeat this year is that I have been seeing a lot of recipes for other things to do with it besides tarts and pies and I plan to try some of them out. Stay tuned! 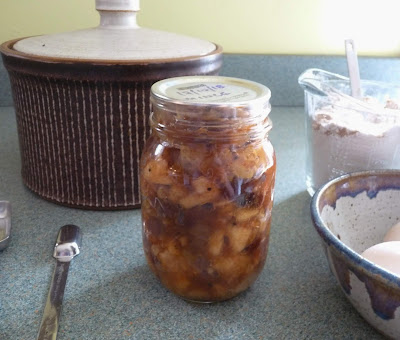 Grind the allspice and cardamom – remove the papery husks from the cardamom after the first few blows – until quite fine. Mix them with the remaining spices and salt in a small bowl.

Measure the sultanas, raisins, and candied peel into a large mixing bowl. Chop and measure the ginger, and add it as well.

Put the jars on to boil in a canner with at least an inch of water to cover them. Put the lids and rings into another pot with water to cover, and bring them to a boil just before you are ready to can the mincemeat.

Meanwhile, peel, chop, and measure the apples or pears, and put them in a maslin pan or other large heavy-bottomed pan with the lemon juice and bring them up to boil. Grate in the orange zest. Squeeze the oranges and add the juice. When the apples or pears begin to soften a bit, add the prepared dried fruits and the spices. Mix well. Heat until the whole mixture is boiling hot, stirring frequently – be careful, this mixture is very thick and scorches fairly easily. Spatter burns will likewise be sticky and unpleasant, so take care. You can add a little water or apple juice if it really looks like sticking, but don’t over-do it.

When the jars have boiled for 10 minutes, drain them and place them on a clean board by the mincemeat. Add 2 tablespoons of rum or brandy to each jar as you will them. If you wish to add a spoonful or 2 on top as well, it will do it nothing but good. Fill the jars, then carefully wipe the rims with a bit of paper towel dipped in the boiling water. Place the prepared lids and rings on them, and tighten them just snugly. Return them to the boiling water bath for 40 minutes.

Let cool, test the seals, and label. The mincemeat should keep in a cool, dark place for up to a year.