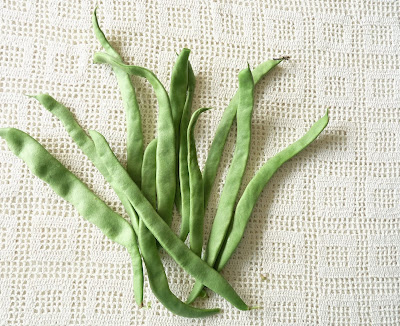 I am away this week, dealing with getting Dad’s house (now belonging to his partner, who has moved to Scotland) ready to sell, so I thought I would leave a series of varietal reports to fill the time I am gone. It is August, and you should be eating salads and simply cooked things anyway.

So! We saw these beans listed by William Dam as an early producing bean and decided to give them a try, instead of our usual Early Riser. They seem quite similar to that bean, although I do think they are slightly better. The photo makes them look scraggly, but bear in mind that we have had a most trying summer thus far. We have had one other summer that was as dry as this one in the decade we have been here, but although it was hot it was not consistently around 30°C for weeks on end like this one has been (although it seems to have finally cooled off a bit). Since we didn’t grow Early Riser this year I can’t compare them directly, but my memory says they too struggle a bit in extreme heat and drought.

In spite of it looking like quite a few beans were aborted due to the above mentioned heat and drought, they are producing really very nicely. They have an excellent, tender texture and flavour from when fairly small through to fairly large. Like other beans of this type, once they start to thicken you have missed them, but they seem to develop a little slowly and even when quite large they are tender and delicious. I saw one site listing them as 52 days to maturity and while that seems a little optimistic I don’t think it is too far off; in cooler summers I would probably expect 60 days. My impression is that they may leave off producing a little earlier than Early Riser, but I don’t actually mind. Early beans are for early; once the Blue Lake get going we tend to switch our focus to them.

I had visions of these beans growing in southern Portugal in little allotments, and who knows – they might be grown there. All the descriptions describe them as French beans. However they were bred by Holland Select Seeds, presumably fairly recently, and who as their name would suggest are based in Holland.  Algarve beans are supposed to be resistant to bean mosaic, and to do well at being grown under cover for earlier production. So far the bean anthracnose has not started up in the garden – the heat and drought is good for something – but I will be watching nervously (and update).

All in all, these are a lovely bean and we will grow them again as our early bean.