As I looked around for recipes to use our Poblano peppers, alambres kept coming up. What, you may ask – I did –  is an “alambre“?

My conclusion (as Google translate was less than helpful) is that it is a kind of stir-fried hash. Google persisted in wanting to translate alambre de chuleta as “wire chop”, which I guess is fair enough since alambre does mean wire, and chuleta means chop, as in pork chops. And yet: no. Nor should you confuse it with Alhambra, which is a very fine piece of historic Hispanic-Moorish architecture.

I am pretty sure that in this particular case alambre is a contraction of al hambre, meaning “to (or for) hunger”. So this is a prescription for curing hungry people, in other words, and a very good one too. It’s fast, it’s easy, it’s substantial, and it’s tasty. All good!

These seem to be most generally dolloped into tortillas and served as tacos, but since I didn’t have any tortillas (whaaah!) I just served it over some steamed rice, which is a perfectly typical Mexican way of doing it too. Also, while most recipes called for some or all of the peppers to be Poblanos, it seems to be made with whatever mild frying peppers are available, so feel free to do the same. Since this is essentially a stir-fry using more finely chopped than usual ingredients, you should be very sure to have everything prepared and standing by – and the table set – before ever you turn the stove on. 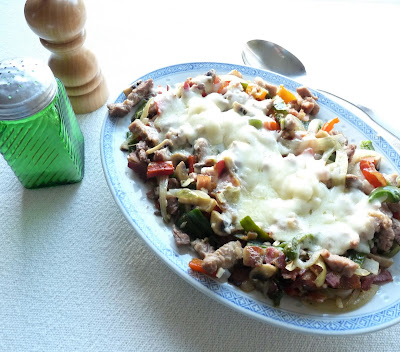 Peel and mince the garlic, and put it in a small bowl. Grind the cumin seed and add it, along with salt and pepper to taste. The amount of salt will depend very much on the type of pork you are using. Set aside.

Wash, core, and dice or cut in small strips the 2 peppers. Clean the mushrooms and cut in long pieces (cut in thick slices, rotate 45°, and slice again). Peel the onion and cut it in slivers.

Cut the bacon into squares. Cut the pork into 1/4″ slices then chop up a bit. Grate the cheese and set it aside by itself.

Put a large skillet onto the stove over medium-high heat. Add the bacon and cook for 2 or 3 minutes, until the bacon is partially cooked and has rendered enough fat to start adding other ingredients to cook in it. Turn the heat up to high and add both the peppers.

Cook the bacon and peppers, stirring frequently, until they soften and reduce a little in volume; 3 to 5 minutes. Add the mushrooms and onions, and mix in well. When the mixture is sizzling again (just a minute or 2, one hopes) add the chopped pork. Continue cooking and stirring for another 5 minutes or so, until the pork is no longer letting off pink juices and, in fact, is done.

Add the garlic and other seasonings and mix in well, cooking for just another minute or two until well amalgamated. You can sprinkle the cheese over the mixture and allow it to melt for a minute or 2, then serve it directly from the pan. Or, transfer the mixture to a serving dish and sprinkle the cheese over it. You may wish to place it under the broiler for 4 or 5 minutes to melt the cheese well, but be careful then as the serving dish will be hot (and must be one that can take this treatment).

Serve with tortillas, as tacos, or serve over steamed rice.

Last year at this time I made Panzanella.