Home » A Field Report » A Visit to Trend Aquafresh Organics

A Visit to Trend Aquafresh Organics 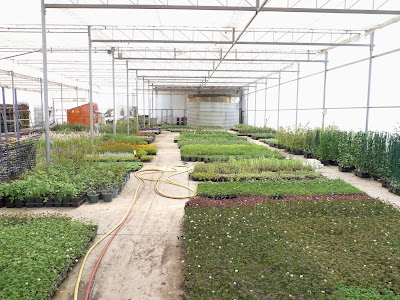 Last Friday we found ourselves down near St. Catharines, so we took the opportunity to visit one of the many greenhouses in the Niagara area – Trend Aquafresh Organics. This was a medium-sized unmarked greenhouse on a gravel side road. Trend Aquafresh does sell directly to customers, but almost all of their sales are through wholesalers or to restaurants. They also specialize in something quite unusual: edible flowers! There are also lots of herbs and some kale and lettuce to fill out those salads. 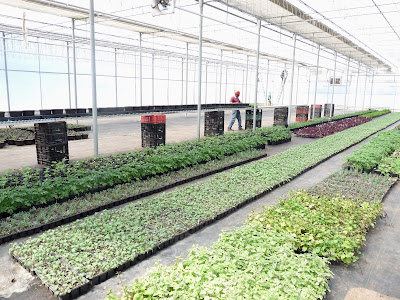 We were given a tour of the greenhouse by Ton Boekestyn, who owns it along with his wife, Jackie. Their website notes they have been in business since 1991, but this greenhouse dates from 2014, so it is really quite new. Ton discussed a number of projects with which they are experimenting, but it seems they are still finding their complete niche. 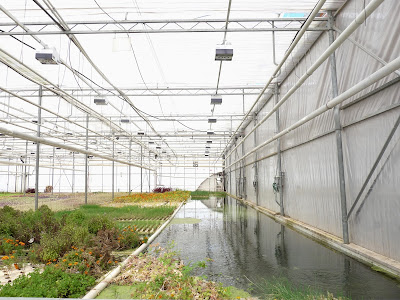 In the meantime, though, they are selling those edible flower and herbs, as well as a few greens. Most of these are grown hydroponically,  and it’s really interesting to see how they do it. Large, relatively shallow tanks float sheets of styrofoam, with holes punched into them in a grid in which the plants reside. Their roots trail in the water and take up nutrients.The tanks are low enough not to be huge, but high enough to be at a reasonable level to work with. 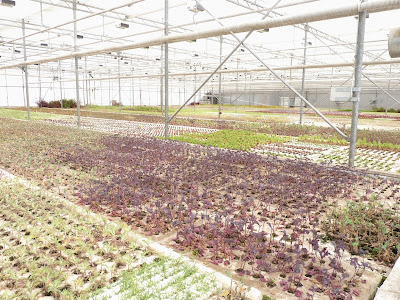 I forgot to ask the size of the greenhouse, but I would guess at least 4 acres. About one third to one half of that seemed to be taken up with various tanks. From this angle we are looking mostly at kale and lettuce. It looks very picked over, because it is. Small leaves are harvested regularly and sent to the packaging line (seen in the second photo). 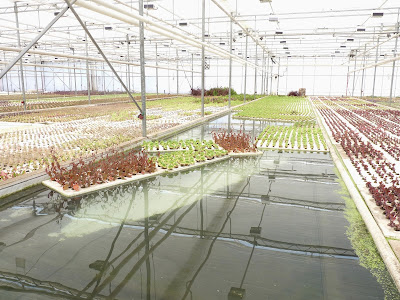 A gap in the trays shows the water. An overhead systems allows the sheets of styrofoam to be moved about and accessed. 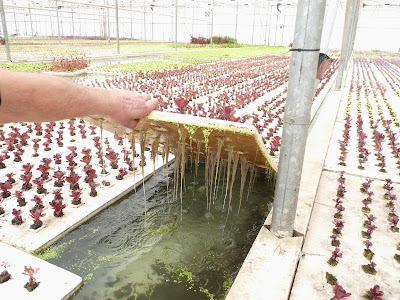 Ton lifts a tray to show the roots underneath. They are certified organic, and add organic fertilizers to the water to keep the plants growing well. 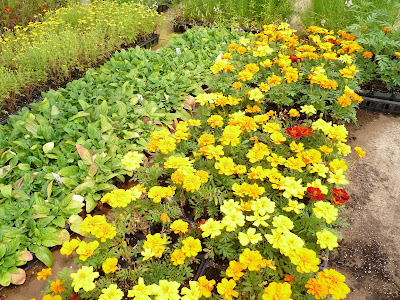 After this long (looooong) gloomy winter, it was so nice to see the trays of flowers in bloom. Here are marigolds. I didn’t really take pictures of the herbs, because they were a bit of a blur of clipped green pots, but there are 14 or 15 kinds of mint, lavender, sage, basil, oregano, and some unusual things – Vietnamese coriander, Jamaican sour cherry, and peppery herb that I forgot to write down the proper name of – my tongue was in shock – but which like the Vietnamese coriander is actually a member of the persicaria family. There are a number of ornamental leaves as well, various clover-like plants, geraniums, and hibiscus.

Meanwhile they are also growing tomato, pepper, and cucumber starts including cucamelon and African horned melon, which will be grown inside through the summer to keep producing into November. (I had said they went outside originally but Ton corrected me here.) There were quite a few things that had been brought by workers in the greenhouse for Ton to try out. Ton said they were growing over 75 different things altogether. I felt like I had met a fellow sufferer from the urge to grow everything. Although I’m not so sure sufferer is the right word for us… for our families, maybe. 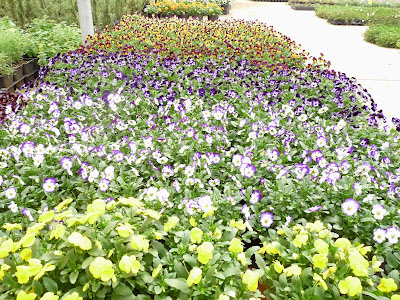 Here are pansies in a striped range of colours. You are most likely to find these as garnishes on your plate when you eat at a fancy restaurant in Toronto. 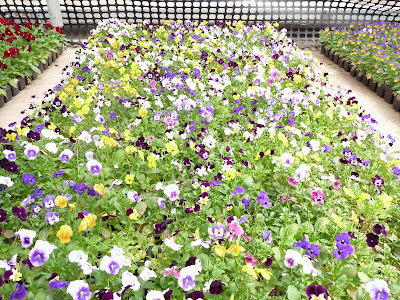 More pansies, in a cheerful blend. Imagine your salad looking like this! 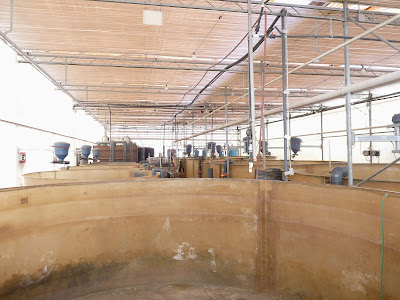 Ton intends to also raise fish. The tanks are in, and he has already experimented with trout. The greenhouse gets too hot for them though. He has licenses for pickerel, sturgeon, and sauger. I am particularly intrigued by the idea of sturgeon, which I have only ever eaten once, but which I thought was absolutely delicious.