Home » A Varietal Report » A Bounty of Zucchini

A Bounty of Zucchini

From all my garden writing and various other comments, you might conclude that we grow a lot of zucchini. That would be correct! And yet, somehow, I don’t have many varietal reports for zucchini. This should help fix that!

The troubles I refer to below to which zucchini are subject, are squash bugs, cucumber beetles, and powdery mildew. Other people complain of vine-borers but thus far *spits, knocks wood* we have been spared that pest. Pretty much all squash, cucumbers and some melons are prone to these ailments in a greater or lesser degree, and they must be regarded philosophically. 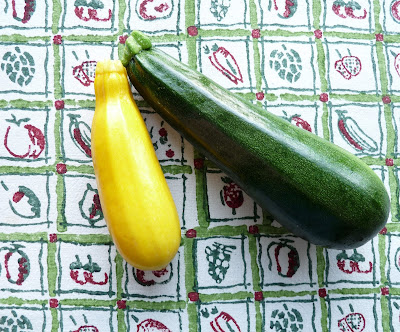 In the photo above; do I even have to say which one? Oh, all right – on the left.

We’ve grown this every year since almost the beginning, in spite of some frustrations with it. The colour is lovely, and our mothers can be relied on to pounce on them whenever one turns up in the offerings. That’s not quite as often as we would like, because this is not the most productive variety, and the fruits tend to run a little on the smaller side.  But golden! And a very pleasant flavour. The other problem is that some plants produce reasonably steadily and others just sit there doing nothing much; we generally plant 2 and between them can expect to get some golden zucchini. They are otherwise no more or less trouble-prone than other varieties, and in keeping with their smaller size as fruits the bushes are fairly compact as well. Should be about 55 days to maturity. In spite of this apparently late date I think our second zucchini of the summer was a Golden one, so not that far off the others.

I’m not aware of another readily available open-pollinated golden variety of zucchini, and even hybrid versions seem a bit sparse. I’d give one a try, given the limitations of this one, but the lack of choices suggest that if you want a yellow zucchini, this is in fact as good as it gets.

It was introduced in 1973 by Burpee, “from material supplied by Dr. Oved Shifress”. Burpee used to be a fine old American company producing better things than anthracnose infected beans (grrr, I am pretty sure that’s where I picked up my nasty case of bean plague). Some people claim it as an heirloom variety, although that seems to be pushing the meaning of heirloom a bit far to me.

I can’t find much information about Dr. Shifress, beyond his association with Burpee and Rutgers University, but that he emigrated to Israel in the 1940s. That suggests Burpee spent up to 30 years working on this variety; a considerable investment of time. It may also explain why no-one has come up with a better version yet.

Also in the photo above, on the right. It is also prosaically known as “Dark Green” which is a more technically accurate description of the colour, but lacking in that marketing oomph.

This is probably the most widely-available standard open-pollinated zucchini in North America, and has been available as seeds to gardeners since the 1930s, although it finally seems to be being supplanted by newer varieties. This site say introduced by the Jerome B. Rice Seed Co. in 1931, and that it won the All American Selection in 1957. I’m comfortable calling this one an heirloom variety, although given its long history I suspect it has been improved over the years. It is so widely popular because it is quite early to start producing – 50 days to maturity – very productive, and resilient in the garden. The flavour is good – what we expect zucchini to taste like, in fact, given its ubiquity – but there are better tasting varieties out there. (Cocozelle and its selection Costata Romanesco come to mind at once.) Still, we grow it most years and are happy to eat it. Best a little on the smaller side. 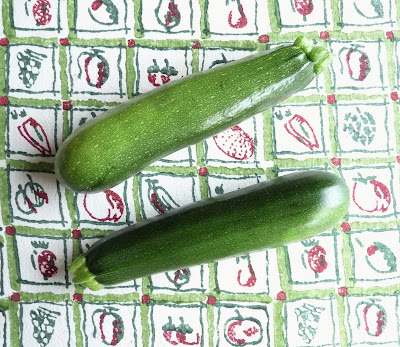 This is a new one to us this year; we got the seeds from Hawthorn Farm.  It is the top zucchini in the above photo.

As you can see, this is very much in the style of Black Beauty. It is still an open pollinated variety, although it seems to be of fairly recent origin. I can trace its voyage to Hawthorn Farm back through Adaptive Seeds and Turtle Tree Seed in the U.S. to Sativa-Reinau in Switzerland. It is not clear to me whether they were the breeders of this variety or not; very possibly.

The main advantage of this over Black Beauty is the open structure of the plant which apparently contributes to it being resistant to mildew. Since we have not yet hit mildew season here, I cannot comment. The above mentioned seed companies all seem to be very impressed though. Like Black Beauty, it should start producing in about 50 days. It is on the larger side of average for a zucchini bush. The stems do feel faintly fuzzy rather than prickly, but I’m not sure how that really affects things. I guess if you are a market gardener picking zucchini for hours it makes life more pleasant, but I worry that it makes them less resistant to bugs. Since we haven’t had any significant squash pests in the last few years I have no data. So far, they are a good, productive standard zucchini. I’m not even growing Black Beauty this year – we were out of seeds and bought these instead – so I cannot do a direct comparison. My impression is that they are at least as productive and probably more so. We are likely to continue to replace Black Beauty with this variety.

We got this one from William Dam, and this is the second year we have grown it. It is the bottom zucchini in the above photo.

Mr. Ferdzy had a grump last year about vegetable seeds, and decided he wanted to try a bunch of hybrids. This was one of them. As usual with hybrids, I am just not that impressed. I mean, it’s fine. It’s a nice compact plant and really quite productive. The zucchini are pretty much indistinguishable from Black Beauty for looks and flavour. It’s supposed to have intermediate resistance to powdery mildew, papaya ringspot virus, watermelon mosaic virus, and zucchini yellow mosaic virus. Since we have had none of those diseases in the 2 years we’ve grown it, I cannot comment except for the powdery mildew. Again, Dunja comes with an open plant habit and lack of spines. My impression last year was that powdery mildew hit hard overnight towards the end of August bringing the production of zucchini by any and all plants to a complete halt simultaneously, including Dunja. So, no on that one. I was quite annoyed as I expect to get zucchini into September. It was, I guess, a bad year for mildew since it was so cool and damp overall. But I can’t say that I think slightly improved production on a compact plant justifies the kind of price that gets charged for hybrid seed.

We’ll plant what we have left of this (maybe nothing because there sure weren’t a lot of seeds in the packet) and go back to open pollinated varieties. William Dam says 43 days to maturity, which is certainly very early. I think it was the first to produce this year, but I wouldn’t say by a week; only a couple of days so that sounds a bit optimistic too. On the other hand a study from Cornell found that Dunja is quite good at setting squash without being pollinated by insects, so if you are struggling with a lack of pollinators you may wish to try this one. Again, this is obviously a newer variety and as far as I can find it comes from a Dutch company called Vitalis. 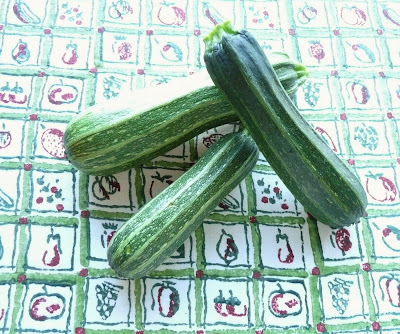 I was a bit amazed to realize I don’t seem to have ever reviewed this variety. All three zucchini in the above photo are Costata Romanesca.

Costata Romanesca seems to be a particular selection of an Italian type generally known as Cocozelle. I’ve grown zucchini labelled Cocozelle in the past, and my impression is that while the two were not completely identical, they were similar enough that either would do. The striped, slightly fluted fruit is quite distinctive. The flesh is a creamier yellow than most other zucchini I have had, and for flavour they leave all the others in the dust. The texture is also extremely superior and these are nicer raw than any other variety I have had.

So why doesn’t everyone grow Cocozelle, Cocozelle, and nothing but Cocozelle? Well, as usual, there are trade-offs. First of all, this is not a compact plant. I’d still describe it as bush rather than a vine (like Tatume), but pretty much by the skin of its teeth. By the end of the season you can expect to be picking zucchini at least 6 feet from where the plant first emerged from the soil. It’s also doesn’t have an open habit, or lack of prickles, or whatever. Some people describe it as positively sticky. For all the space that it takes up, you don’t get more squash than with the compact bush varieties; a bit less even. At 52 days to maturity, it’s on the late side – although I will note that you are not waiting more than a week from the earliest varieties to start picking these, which isn’t that long in the grand scheme of things. Besides the distinctive ribbing, they are likely to be a slightly ungainly shape compared to more modern varieties.

But really, when all is said and done, this is a variety I recommend to just about everyone. Only a great deal of space pressure would induce me to give it up for another variety. We do plant other varieties, for different colours or earlier production, but I just wouldn’t want to be without this one. It is the best.

It is said to have decent powdery mildew resistance but as usual, not that I’ve ever noticed.